In order to see the northern lights one must have all three of the following: solar activity, clear(ish) skies and little light pollution. Last night there was a slight chance (a score 3 out of 9) for solar activity and clear skies. Our hostel was on the outskirts of town.

That was enough for Andy to set his alarm for midnight with hopes to see his first northern light show.

There were a few stars out at midnight so Andy got dressed and headed outside. He looked up and immediately saw a shooting star.

He was happy. It wasn’t too cold and the sky kept clearing. He was hopeful. He called his parents, blogged and saw a few more shooting stars.

Around 1:30am the temperature dropped and the wind picked up, but Andy persisted.

At 1:45am he thought he heard chickens. Fearing he was hallucinating, he thought it was time for bed but he kept hearing them and remembered the hostel offered fresh chicken eggs for 50ISK. Then he heard the ducks calling.

He couldn’t help but laugh.

He returned inside around 2:15am disappointed but content with the multiple shooting stars. Laurie was sound asleep spread across the double bed but easily moved over to let Andy in.

We both had trouble opening our eyes when the alarm went off at 7 am. We bargained with one another and finally got up at 8. We opted to eat on the road to save precious time and daylight. It was going to be another jam packed day.

Our first stop was a waterfall just past the hostel in the opposite direction. The morning air was fresh and only a few clouds hung in the sky. We scampered up the hillside, Laurie aching to just keep hiking.

The constant feeling of needing to keep moving to see it all has been the hardest part of this trip. The weather makes it really hard to plan and there is just too much beauty to see in 10 days.

Essentially this trip feels like a scouting trip so we will know where to come and spend more time next time we come. (And there will be a next time – this country is amazing!!)

We stopped off at Gufufoss waterfall on our way back up the hairpin turns.

On the way down from the pass we noticed a car on the side of the road facing us at an awkward angle. We slowed and stopped to help an older French couple who had veered off the road and buried their wheels in the steep bank.

We were the first of 7 cars to stop and try to help. It was amazing to see how helpful everyone was. Andy and another gentleman attempted to push the car out but the wheels spun and dug deeper into the loose soil.

Ultimately a suave Icelandic driver backed the car down further into the ditch to level it out a bit and gain traction. He then slowly and methodically drove backwards partway up the bank. A big rig positioned itself on the narrow 2 lane road to pull the car out. The locals strapped one end of a tow rope to the car and one to the truck.

As the truck driver slowly inched forward and Mr. Suave slowly drove in reverse, the right rear wheel of the car came off the ground. After a few tense moments all four wheels were on tarmac once again. All the bystanders applauded the efforts of the friendly and helpful locals.

From here it was a long 2 hour stretch through snowy alpine tundra and along a river.

We have been checking the road conditions religiously since we are not in a 4wd car. The road to Dettifoss indicated there were patches of ice but it was fine to drive. We were reassured to see the road was paved all the way to the west side parking lot.

Dettifoss is the largest waterfall in Europe. It is much wider than most and the amount of water that thunders down is insane- according to one guidebook 500 cubic meters (17,700 cubic feet) of water spill over the ledge every second.

The area around the falls is all volcanic and it was fun walking around what felt like a Mars like environment.

Selfoss was a 1 km walk upstream and was a smaller but similarly powerful waterfall. While Dettifoss is a singular and long waterfall at a ~45° angle, Selfoss is more of a bowl shaped waterfall and very pretty in its own right.

Back in the car we drove to Krafla, past a power plant and up to the caldera which was formed during the volcanic activity of the 1970-1980s known as the “Krafla- fires.”

On the way down we saw a bunch of cars and one tour bus parked in a snowy parking lot. Tour buses are our indication of something interesting so we followed the muddy footprints through the snow to the colorful crater of Leirhnjukur.

The sulphur smell was strong but the light blue water and surrounding orange clay provided a nice contrast to the dark molten lava and snow.

We were happy we made the side trip but yet again there was so much to see and it was already 3:30pm. With 2 hours of daylight remaining we opted to skip seeing more geothermal mud pits and instead turned toward the underground hot spring of Grjótagjá.

Unfortunately it is too hot to swim in but to the hands it was nice and the water was incredibly clear. On the way out Andy hit his head on a rock neither of us saw, resulting in a sizeable welt on his forehead (what Armenians call a shishka).

Laurie of course started laughing as Andy asked rubbing his booboo, “Ah, what was that?”

“A rock probably” spit out Laurie amidst giggles.

“Yes, definitely a rock ” confirmed Laurie after lightly hitting her head on the same rock.

Our last stop of the day was the 3,280 foot wide crater of Hverfell. We hurried up the steep path along the side of the crater trying to stay warm. The strong wind whipped sand at our faces near the top.

Once at the top we stayed long enough to take one picture before turning our backs to the wind and heading down.

We checked into our bed and breakfast and went out to eat a nice, tasty farm to table meal.

The restaurant was called Vogafjós Cowshed Cafe. They use the word “cowshed” quite literally as there were cows eating hay right next to the dining room, but that did not stop us from ordering a burger.

We split that and a lamb flank. With so many sheep grazing about we had to try some of the local cuisine.

We are now cozy in bed in our tiny little room with a wall of windows. Fingers crossed for an active evening of northern lights! Today’s score is 4 out of 9 so there may be some green lights overhead..

Tonight we are grateful for sunshine and farm to table restaurants. 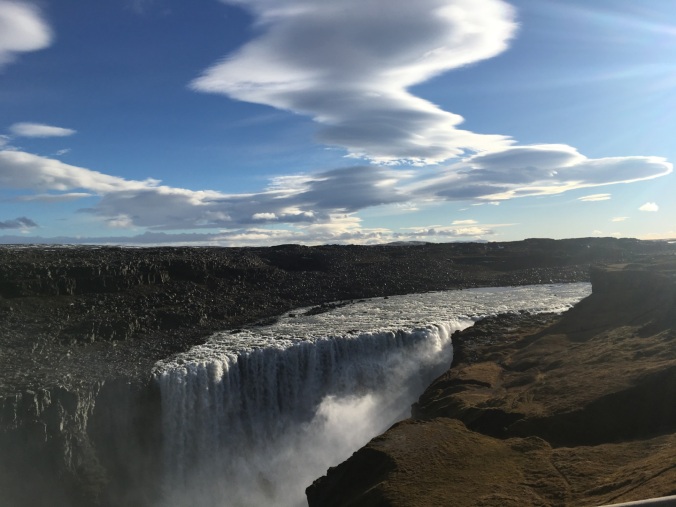 Selfoss (or Selfiefoss if you’re Laurie) 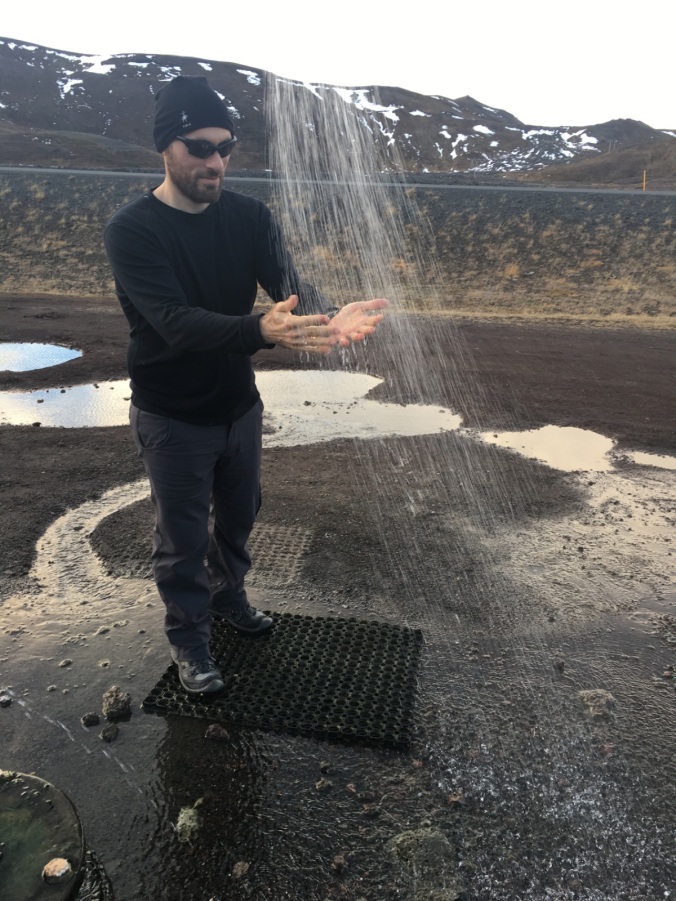 Leirhnjukur hot shower (there’s a sink next to it too!)

2 thoughts on “Day 5 – Highway To The Thermal Zone”