Andy woke Laurie in the middle of the night to look at the stars. It was nice being able to star gaze from the warmth and coziness of our bed.

Orion was bright and easily recognizable. Unfortunately no Aurora Borealis was to be seen.

Laurie’s eyes stayed open for about 3 minutes before they closed again and she was fast asleep.

Last night we made changes to our plans. We both really want to explore an ice cave, but unfortunately they are all located in the southern part of the island. We tried booking a few when we were down there but they were all sold out.

One of Andy’s favorite sayings is “Why put off for tomorrow what you can do today.”

So we booked an ice cave tour and will stay on Road 1, taking it back toward Vik instead of exploring Northwest Iceland. We feel good about this plan, even though it means we will literally be halfway across Iceland two days from now.

We had a nice breakfast at our hotel including “geyser” bread which is dense rye made in holes in the ground and cooked for 24 hours from the heat of the geysers. It wasn’t the tastiest thing (at least for Laurie) but it was nice to try.

We drove about 40 minutes to the Godafoss waterfall under dark but clearing skies. This is another giant waterfall formed from a river carving a path through 7,000 year old lava fields.

It was very pretty and not yet very crowded as it was still early in the morning and most people were having breakfast.

Laurie snoozed while Andy drove another hour to the town of Akureyri, Iceland’s second largest town.

Here we decided to partake in a common Icelandic recreation activity – swimming.

Andy does not know how to swim but is trying to learn. He took swim lessons earlier this year but hasn’t had much of an opportunity to practice mainly because he hates chlorine and most pools around the Bay Area are heavily chlorinated.

Laurie was excited when she learned about the amazing Icelandic pools. She packed googles, a swim cap and even ear plugs to make swimming as enjoyable as possible.

Hopefully Andy would feel more comfortable in less chlorinated water and this would be a fun way to break up the long driving days.

Our morning at the pool did not disappoint, even though it was a balmy 9 degrees celcius.

We payed our entrance fee equivalent of $9 and parted ways into our respective changing rooms.

Laurie busily put on her bathing suit and swim cap and was looking for the exit to the pool when a lady stopped her to ask if she had showered. She hadn’t. She went back to do so and learned there are dry and wet sections to the locker room to keep the place as clean as possible.

One is supposed to undress, place his/her towel in the towel section, take his/her bathing suit to the shower where you shower naked and THEN put on your bathing suit. This all makes sense, particularly when done in the reverse order after the pool however to a newbie American if felt quite complicated.

There are many pool options – 4 hot tubs, 2 slides, a kid pool, open water pool and lap pool. All of which are heated with natural spring water (plus a little chlorine).

One of the coolest features of the pool is the possibility of a wet entry. There is a small pool indoors and plastic flaps allow you to enter the outdoor open water pool without having to brave the cold air.

It is like a doggie door for humans. Of course there are regular doors too for those who are used to the cold, but that was not us!

We played on the slides for the most part. Laurie took a little break to do some laps while Andy sat in the “hot pot.” Unfortunately one of our pair of googles fell off Laurie’s head at some point so we both couldn’t swim at the same time. Honestly, the slides were too fun for Andy to want to work on his swimming.

We pulled ourselves away to continue with our plan for a grocery run and a hike. Andy drove (Laurie slept) another 40 minutes north toward a trail that led 2,000+ feet up to a lake in about 3 miles.

Unfortunately the clouds got darker and darker and the winds grew stronger, especially so when we turned inland to find the trail. It was not ideal hiking conditions so we turned around.

Truth is we probably wouldn’t have been able to get very far anyway because of the amount of snow on the mountains.

We drove back to our guesthouse and relaxed for a bit before heading out to wander around the town of Akureyri, where the winds were mild and blue clouds were overhead.

Many of the shops were closed but we did try some Icelandic ice cream and leaned how to say “thank you.”

As it got dark we came back, made dinner and blogged as the wind howled outside.

Tomorrow will be another long driving day but we hope to break it up with some more waterfalls and whatever else piques our interest.

Tonight we are grateful for each other and clean and cozy guesthouses. 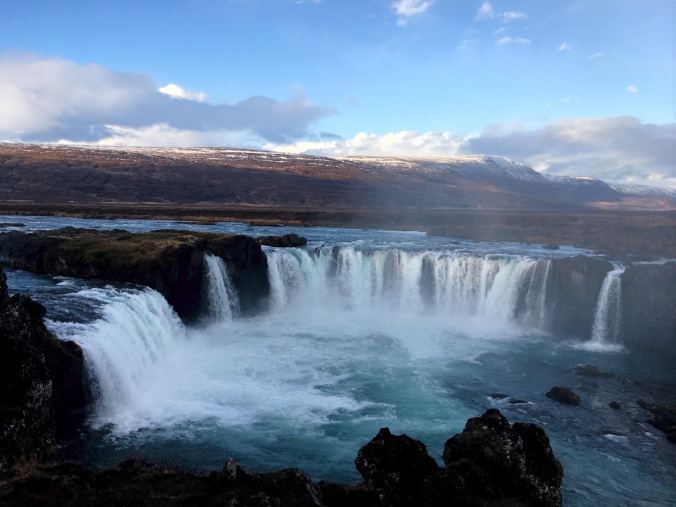 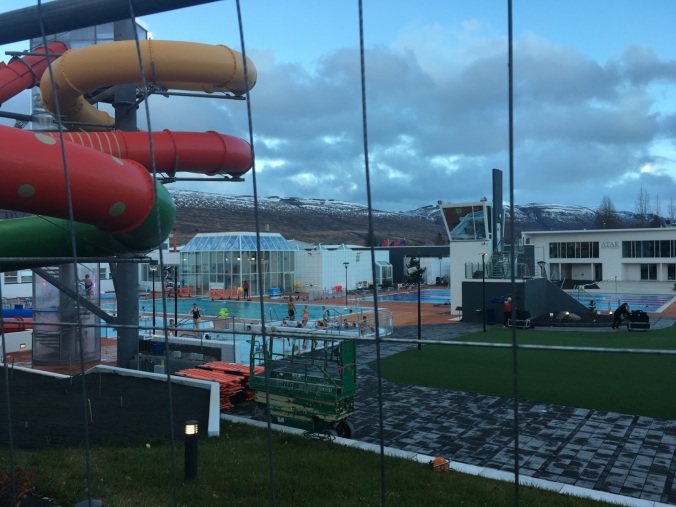 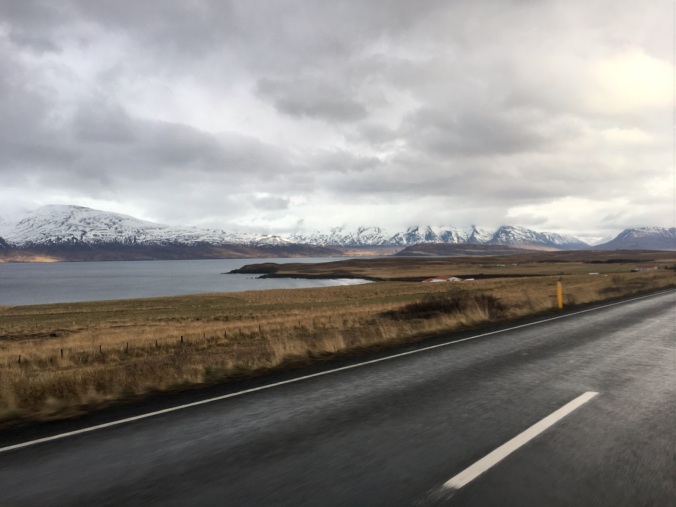