Last night was cold. We opted to sleep without the fly so we could admire the stars but Laurie tossed and turned all night trying to get warm.

She was too lazy to sit up and rummage through her backpack for her beanie so instead she kept sinking lower and lower into her sleeping bag.

Eventually she took apart half of her pillow (a down jacket and fleece rolled up in a Buff) enough to stick her head inside. Instantly she felt warmer and was able to fall back asleep.

As the name suggests, we camped at a lake with views of Diamond Peak. We decided to get up early to admire the morning light on the mountain while drinking hot chocolate and tea. Hot beverages are a great incentive to get out of a cold tent.

It was cold but there weren’t any mosquitoes. We took our stove and Talenti containers down to the shore and sat on a log watching steam rise from the lake. Diamond Peak basked in the early morning light and the reflection on the lake was similarly beautiful.

We had agreed to hike into Shelter Cove with Speed, Boone and Katie. Our proposed departure time was 7 am but at 6:50 they were all packed and ready. They started down the trail with the expectation that we would catch them, but we never did.

Others think we hike fast. Maybe we look like it, but we don’t. We joke that our couple trail name should be Start and Stop since we constantly stop to take pictures, admire rivers, soak in the views and take breaks.

We got to Shelter Cove Resort around 9:45. We immediately started charging our phones while sorting through our resupply boxes.

It is always difficult to estimate how much food to bring. Andy is definitely more hungry now and Laurie’s appetite continues to fluctuate. For this 85 mile section we settled on 4 breakfasts, lunches and dinners with lots and lots of snacks. So far we haven’t run out of food and often give a lot away.

Shelter Cove has 2 picnic tables designated for PCT hikers. We spent 7 hours there writing, editing and uploading our blog posts as well as responding to emails and calling family. We also chatted with other hikers, snacked out of the hiker box and relaxed.

Laurie stretched and elevated her legs too. Unfortunately this doesn’t happen as often as it should. Her knee is feeling much better today – who knows if it was the swimming or the 20 mile day, doesn’t really matter though – she is happy to be pain free.

We hiked out around 5:20 with Just Karen and Derek. We opted to walk up the road to the highway rather than retracing our steps 2.1 miles to the PCT.

But after walking about a mile, we had enough and stuck out our thumbs to any car that passed. About 5 whizzed by before a nice couple (Don and Kay) stopped.

We climbed into the bed of their truck, squeezing in around the 5th wheel receiver. By that time it was only half a mile up to the highway but it was uphill and twisty.

We left the trailhead around 6 pm and hiked gradually uphill to Lower Rosary Lake 3 miles away. It was a beautiful Oregonian lake – clear, warm water surrounded by trees.

The best part was the breeze.

The wind was the strongest and most consistent we have experienced in days which meant few mosquitoes!! Laurie almost squealed with delight.

We found a spot big enough for 3 tents and set up home. Andy cooked dinner and chatted with Karen and Derek while Laurie curled up in the tent. She was full from snacking all day and didn’t have room for any more food.

The temperature dropped significantly after the sun went down. We again toyed with the idea of sleeping without the fly (we apparently don’t learn very well) but ultimately decided to put it up to protect against the cold wind. Hopefully it helps and we sleep well.

Tonight we are grateful for wifi that allows us to publish our blog posts and morning alpenglows.

Laurie's attempt to have a beard as awesome as Andy's. 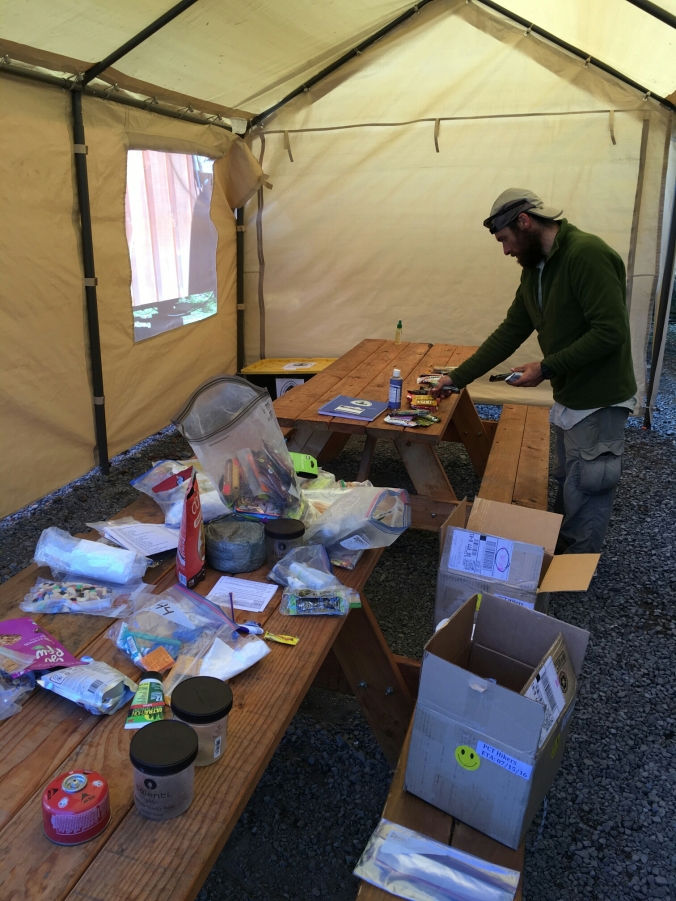 This guy almost hopped into our backpacks at Shelter Cove 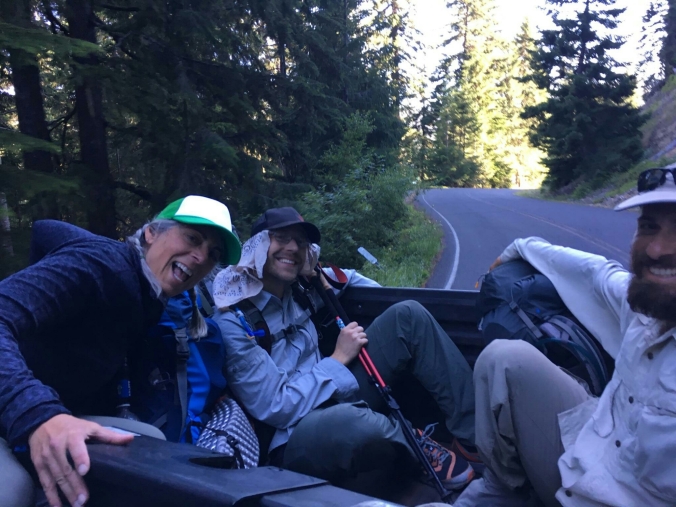 Hitching success thanks to Don and Kay 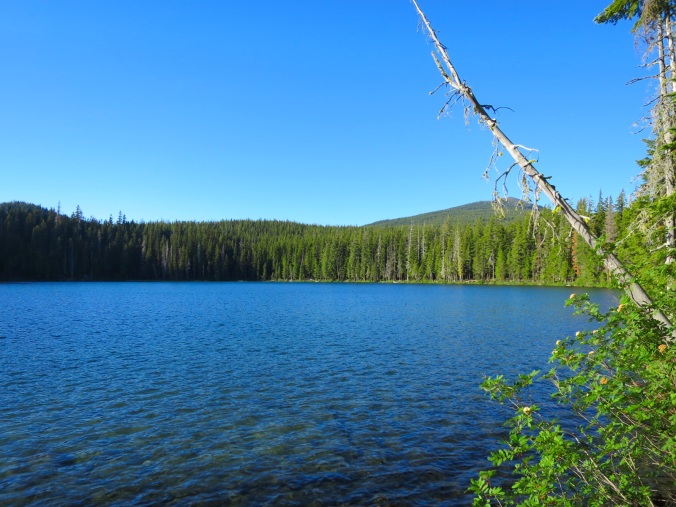 First snowshoe this winter was to Minaret Vista in Mammoth. It's a fairly level snowshoe but still challenging at 9000 ft. It was blustery but Miles stayed nice and toasty in his koala onesie. It was a good test run for the adventures we have planned for this winter. : : : : : : #minaretvista #mammoth #mammothmountain #mammothlakes #snowshoe #snowshoeing
We left LA with one goal - camp in the Alabama Hills and wake up with the sun kissing the Eastern Sierra range (I guess that's two goals?) At 7am we ripped the vinyl covers off the camper windows, excited to catch the sunrise. In doing so we woke Miles, who looked around, still delirious with sleepy eyes, wondering what all the commotion was about. We both laughed, knowing how grumpy Miles can be when woken from his sleep unnaturally. In the end, it was worth seeing the sun light up a mountain so special to us. And sharing that with our little man made it more special. : : : : : #alabamahills #alabamahillscalifornia #easternsierra #sunrise
“Hey look, we’re hiking above the clouds” says Laurie to the LA native. To which I respond, “No sweetie, that’s haze.” A lot of people don’t like LA for a lot of reasons, many of them valid. But I’m still one that really appreciates the Nature that is so accessible from many parts of the city. This photo was taken from the Mt. Wilson Trail, built in the 1800s, that begins in the town of Sierra Madre and ascends ~almost 5,500 vertical feet (in under 7 miles) to the top of Mt. Wilson. The trail kicked our butts as we hadn’t done a hike like this in a long, long time. It’s been three days and we’re still very sore from it. . . . . . . #mtwilson #mtwilsonobservatory #mtwilsontrail #mountwilson #socal #socalhiking #hikinginla #mountwilsontrail
We’ve enjoyed two solid days of play this weekend. Doesn’t happen very often but it sure felt good to get outside! Video - Sugarloaf Open Space, Walnut Creek, CA Photo - Marin Headlands
Just a guy skipping rocks like a boss (:
An overnight in the #DesolationWilderness earlier this week was 👌 We took Miles to Twin Lakes, a place special to Laurie as this is where she first went backpacking throughout her childhood. Sharing these places of significance with Miles is very rewarding. And seeing him enjoy himself in the mountains is too.
%d bloggers like this: