Our day started off like any other. We were up at 5am and hiking by 6, ready to walk the 1.7 miles and 700 feet up to Selden Pass.

This was the easiest pass yet. We didn’t put on our crampons until descending from the summit to Marie Lake and beyond.

We hiked with Dirk and Sabine and were soon joined by So Hard and Lefty. Stoic joined us moments later and we took another group shot to celebrate our successful hike up a pass.

We didn’t see So Hard, Lefty or Stoic after that.

Marie Lake was one of Andy’s favorite lakes when he hiked the JMT in 2012 and he was especially excited to be back there. As with everything else, the still frozen Marie Lake looked very different. It was even more beautiful.

The descent was pleasant as the snow was still quite hard and the scenery was spectacular. We lost the trail a few times but managed to hike our way down to a beautiful meadow, keeping Dirk and Sabine in our sights.

After a few switchbacks we reached our final hurdle of this leg, Bear Creek. This ‘creek’ has a reputation of being a difficult crossing during the early season, and especially so in normal to above average snow years.

Dirk and Sabine were scouting the crossing when we arrived. Andy’s stomach tied in a knot. It was flowing…fast!

Could we do this? Andy wondered to himself.

Soon Dirk and Sabine were packed and ready to give it a go. All was well when they first got in the water but after a few steps Sabine was shouting in German.

The current got stronger.

She grabbed onto Dirk, losing her footing a few times. Finally, after what seemed like forever, they made it across.

She was shaken. But they made it!

Now it was our turn.

We extended our trekking poles and elected to cross using the same line as Dirk.

Not even a third of the way across Laurie shouted “Turn around.”

“Turn around! It’s too strong.”

Back at the shore we studied the current and chose to cross a few feet down from the previous spot.

We entered the water again, Laurie going in first again.

All was well for the first few steps. Then Laurie hit the strong part of the current. She paused for a split second and the current unsettled her.

She fought to regain her footing but it was too late.

Andy turned around as quickly as he could to shore and headed downstream.

Laurie fought the current, turned herself around and by grabbing the rocks below made it back to shore 10 feet down the river.

She was a shocked, wet and her legs were bruised from the rocks under the water but she we ok.

By the time we made it back up to where the trail crossed the creek Dirk was also there. He had crossed back to make sure Laurie was ok.

He insisted on taking Laurie’s pack and helping her get across.

Slowly, with Laurie holding on to Dirk, they made their way back into the water and went for it.

They both made it to the other side soonafter.

Now it was Andy’s turn.

He stepped in the water and went almost a third of the way, then stopped for a few moments before turning around.

The current was just too strong for him.

He took out his other pole and went for it again, with a hiking pole in each hand.

But near the same spot he turned around again.

Bear Creek isn’t very deep – at Andy’s thighs at its deepest, but it packs a punch.

How would be get across he wondered?

Dirk came to Andy’s rescue too, crossing yet again, taking his pack and escorting him across.

It was a hairy crossing for Andy, even while hanging onto Dirk.

Dirk had chosen to cross where Laurie attempted to cross before she fell in.

Andy couldn’t see where to place his feet so he kept slipping. At one point his left foot got stuck in between rocks. He grabbed onto Dirk, pulling both of them backwards. But Dirk held on and pushed through.

Andy finally managed to get his foot free and made it across.

What a wild ride.

We are so thankful and grateful for Dirk. Without him we couldn’t get across.

On the other side we took stock of what was lost downstream. Laurie lost one trekking pole and a water bottle. And Dirk lost a water crossing shoe helping Andy.

While we were resting, drying ourselves and warming up (the creek was really cold), two hikers appeared.

They asked about the best place to cross and went for it. The first hiker made it across without issue, making it look so easy.

The second hiker who was slightly taller than the first one, crossed with relative ease as well, with his smartphone between his lips.

What kind of skills do Dirk and these guys possess that we don’t? Why was this so much harder for us?

We lack the experience in crossing strong, gushing rivers.

It could also be technique.

Dirk’s technique was vastly different than the other two hikers’ – who faced the stream.

After 15 minutes we were all dressed and hiking again. We turned a corner and saw a relatively calm, wide river similar to Evolution Creek.

It was Bear Creek.

Why didn’t we look up or downstream before attempting to cross where Dirk and Sabine did?

We knew this coming in. Scope out the rivers before crossing. Look up and down river. Go half a mile in either direction if you have to. But we didn’t do that.

Strength in numbers and other experienced hikers knowing more than we do (or so we think), caused us to follow instead of choose our own paths.

It was a hard way to learn this one again, but we both realize we need to do this for ourselves.

After crossing two more swollen creeks Dirk and Sabine took a break while we continued on toward Bear Ridge.

We finally got service and stopped to call Tuolumne Meadows on behalf of Dirk and Sabine.

Their package should be waiting for them at the Post Office there – a great relief for both of them.

We thanked Dirk and Sabine again for all their help and companionship and took off. We had to hike 7 miles to catch the 4:45 ferry to VVR.

We hiked fast, not talking much and eating on the go.

At 4:20pm we were sitting on the shores of Edison Lake.

We talked about our thoughts and emotions surrounding today waiting for the ferry.

We had pushed through the Sierras since Lone Pine. It’s been beautiful but it’s come at a price. Laurie is grateful to make it to camp every night because the day is finally over.

And she’d quivered every time we came across a stream crossing.

We just aren’t having fun anymore. And while thru hiking isn’t meant to be easy, it can be fun.

The desert was challenging but it was fun. We were safe there. We laughed a lot. The last few days in the Sierras we haven’t felt safe. We feel we are in over our heads.

And while we can push on knowing we’re through the worst of the crossings, we don’t know what the rest of the Sierras have in store for us.

Snow is melting rapidly. All streams have the potential to be swollen. That isn’t fun for us.

What we’ve both come to realize – especially Andy – is that being together and enjoying this wonderful time together is more important than hiking in a straight line from Mexico to Canada.

So we’ve decided to skip the rest of the Sierras and come back after finishing Oregon and Washington.

We’re not sure where we will skip to but we will figure it out. Stay tuned.

It’s now 5pm and the ferry never came. High winds being the reason when we called them.

Do we walk 6+ more miles to get to VVR tonight or camp at this side of the lake and take the ferry there tomorrow?

We decided to camp at the lake with Paul, another disappointed hiker who showed up shortly after we did.

Tonight we’re grateful for Dirk and the fact that we’re safe and uninjured. 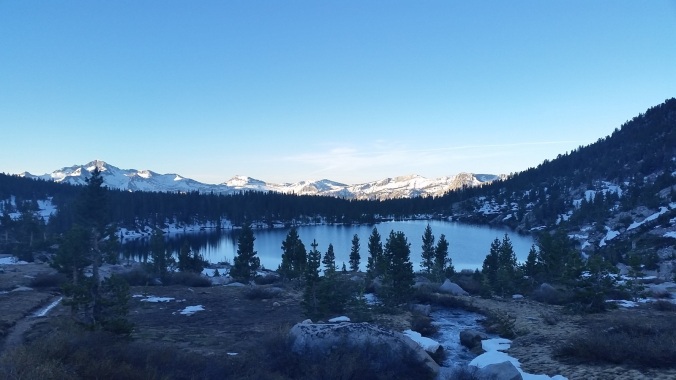 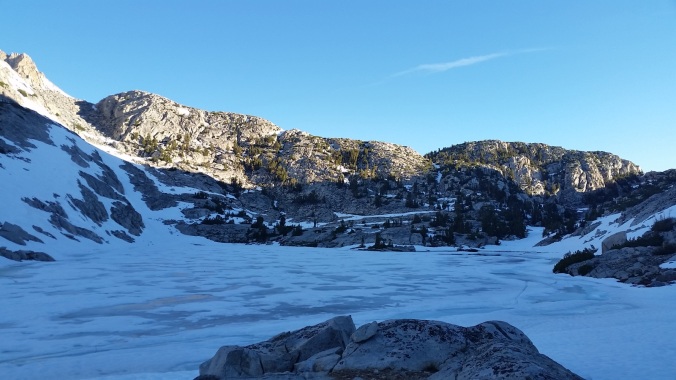 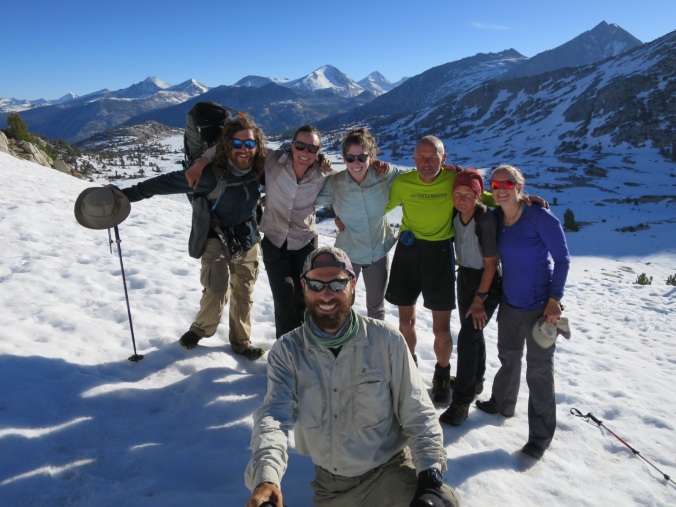 From left to right: Stoic, Lefty, So Hard, Dirk, Sabine, Laurie and Andy up front 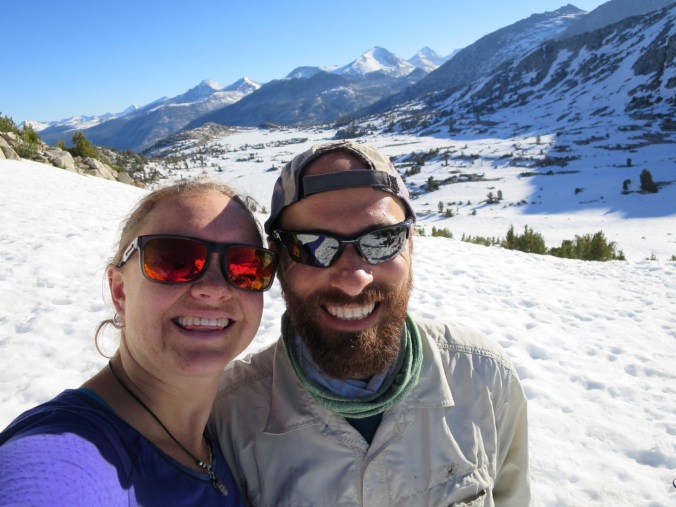 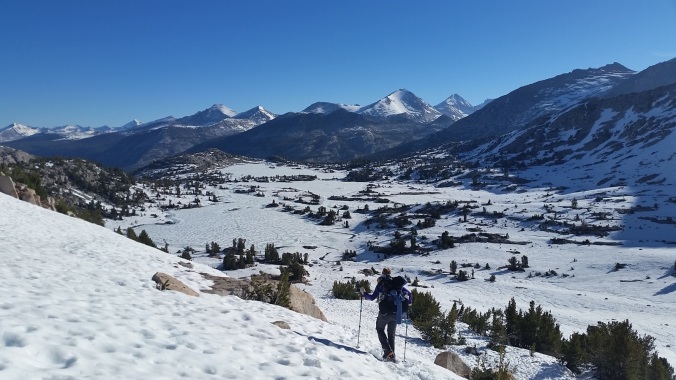 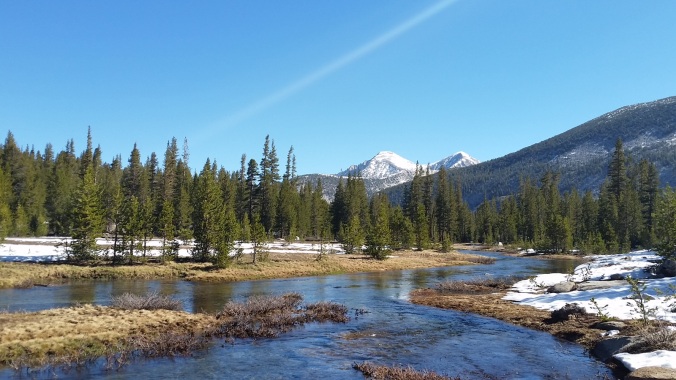 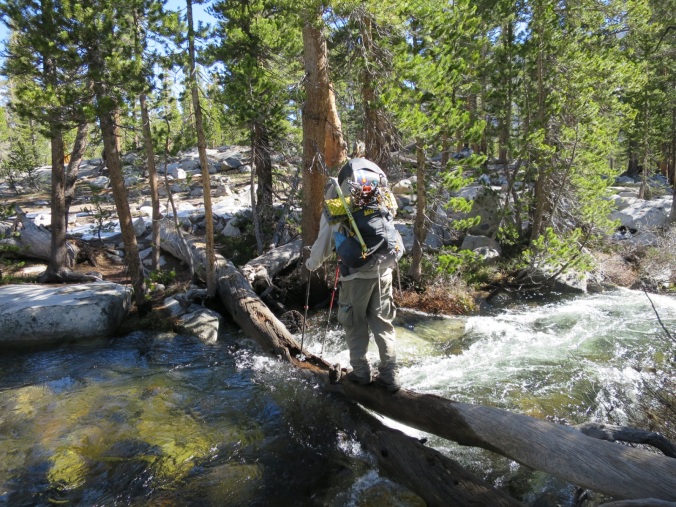 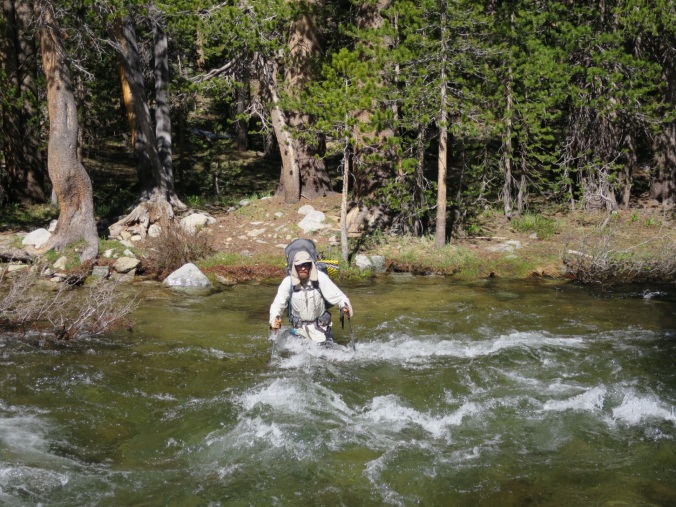 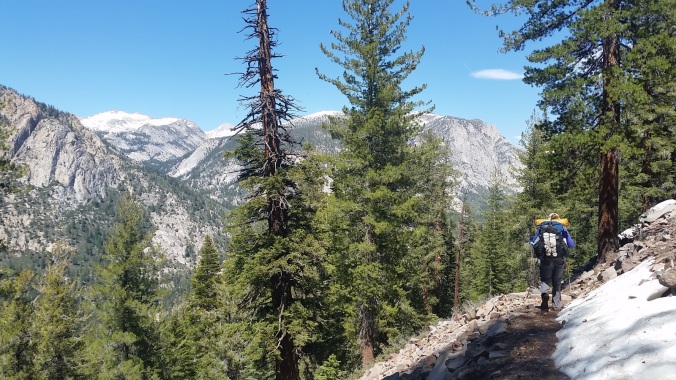 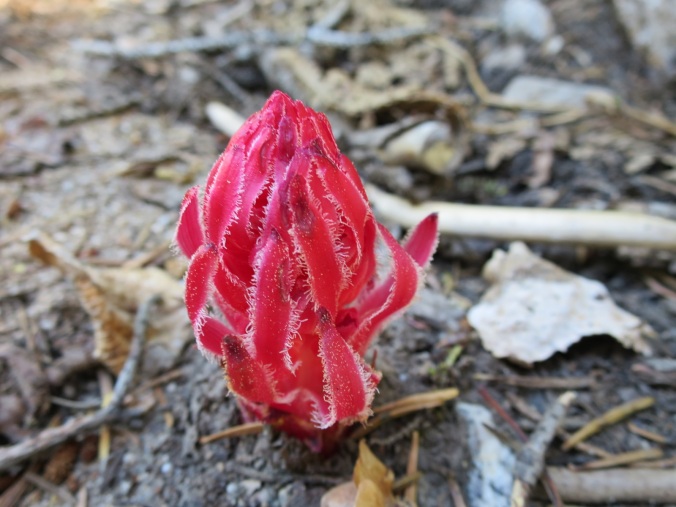 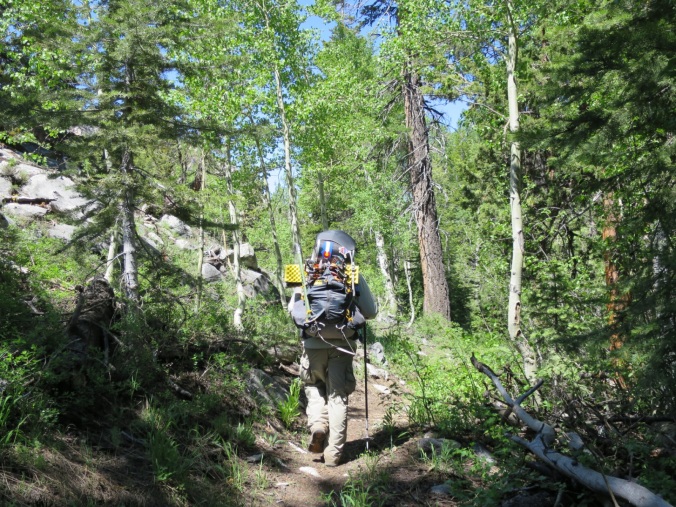 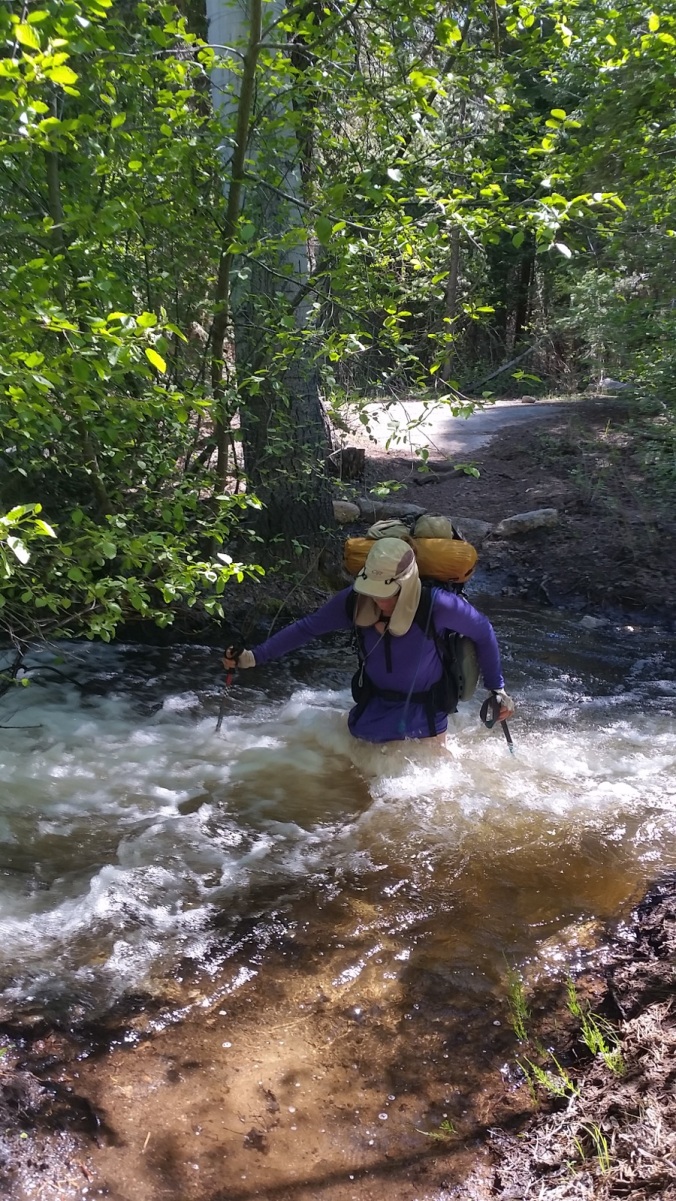 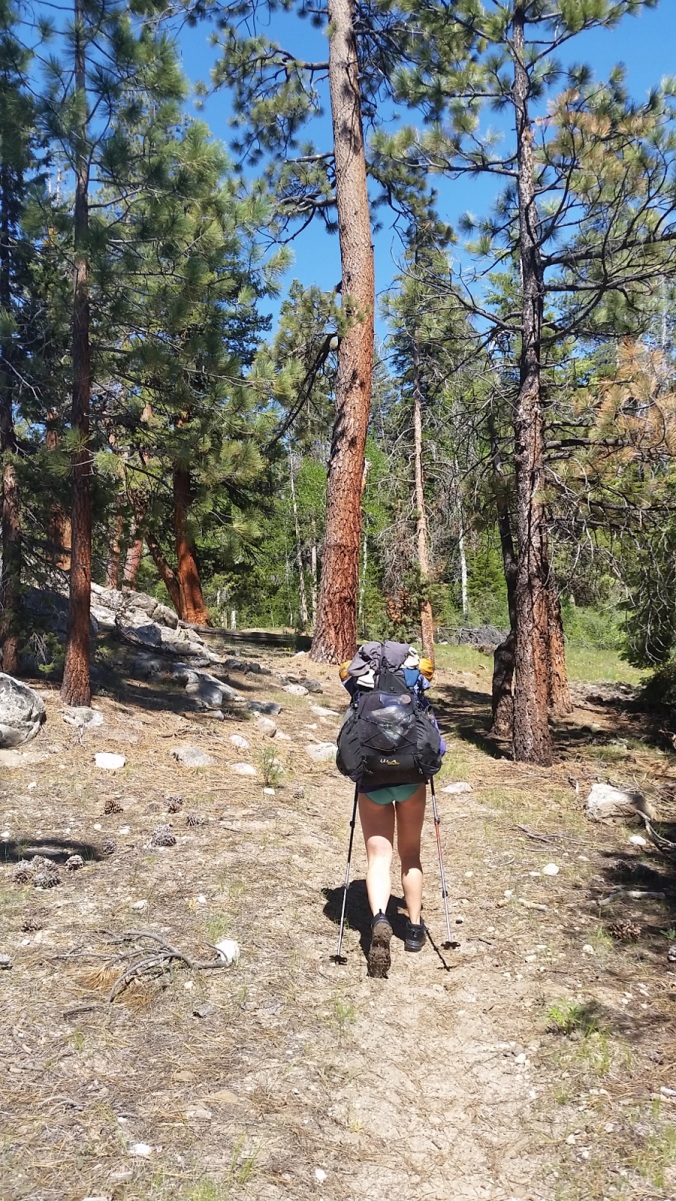 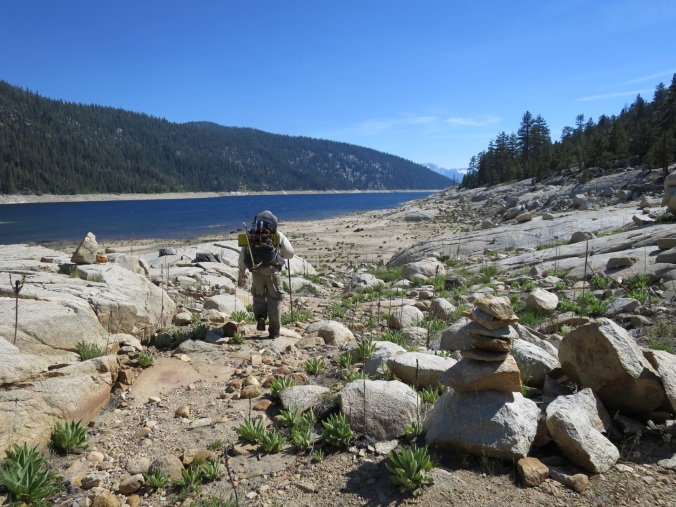