We awoke to a blue sky and birds chirping. We watched the sunlight pour in through the trees around us through the mesh of our tent. This is the life!

We have really enjoyed the precipitation free nights. Sleeping in our tent without the fly is like bug free cowboy camping. We see the stars and feel the wind but don’t have to worry about scorpions or snakes crawling over us at night.

We did a better job packing, breaking camp and hitting the trail. It was 7:18am when we started walking.

Immediately the trail continued up. It was a gradual climb which allowed our muscles and core temperature to warm up. We hiked amongst the trees feeling grateful for the shade and hoping that it would continue. Without the breeze the air was warm.

After 1.4 miles we came to a meadow colored with yellow and purple flowers. We took a moment to enjoy the view before starting down into a valley.

The trail was gradual which allowed us to walk faster. Andy was captivated by the jagged peaks and kept stopping to take pictures.

Just before the lowest point we stopped on some rocks to take our shoes off and eat a bag of very heavy and delicious trail mix. Our new strategy is to eat the heaviest foods first, no matter how much we like it (and want to save it for later) or how long it’s been since we last had it.

We ran into a botanist from the Bay Area who is out here doing field work. She mentioned that Chimney Creek Campground is a wonderful place to come without the typical crowds of a drive-in campground. We made note of this for the future and walked on.

From here the trail climbed another 2,367 ft. Two miles into the climb we came to Fox Mill Spring. The water was flowing well here. We filled up 2 liters each, Laurie washed out her socks and underwear and we ate lunch.

Hikers tend to gather at watering holes. The topic of conversation these days is “The Sierras” and what each hiker plans to do.

Laurie came up with a tentative itinerary for the next 6 days – we will learn more tomorrow when we get to Kennedy Meadows. It is reassuring to Laurie to have a plan so we will start with that and adapt as needed.

We chatted a bit with a couple named Jenny and Justin who are also from San Francisco and have a similar plan. We will see if our timelines match up once in Kennedy Meadows.

We left the spring and continued to climb. Laurie played music that we both could hear to help motivate and distract us from the effort. It was hot. We walked out of the forest and into a previously burned area. We could see the trail traversing the mountains around us.

Sometimes it is better not to know where the trail goes. This one went on for a long while it seemed, but looked very gradual.

Andy suggested that the trail should be called the Pacific Traverse Trail rather than Pacific Crest Trail.

Eventually we got to the high point. In the distance we could see white snowy peaks. Andy got goosebumps. We had made it through the desert and soon (hopefully) we will be walking through the Sierra Nevada mountains!

We started to descend, again traversing the hillside. We could see the trail in the distance and every turn we made the trail just kept going.

The wind was strong creating a lot of dust. Laurie, who was walking behind Andy, gave him more space than usual so as not to swallow dust.

“What is it?” Asked Andy who was 20 ft ahead, now walking back to Laurie who was frozen in place.

“A little snake” replied Laurie. She’s never sure which snakes are rattlers and which aren’t so unfortunately all snakes scare her A LOT.

By the time Andy walked back the small garter snake had retreated to the bushes. They move fast when they want to!

About 20 minutes later Andy came to an abrupt halt, holding his poles out on either side. A rattlesnake slithered into the bushes near the trail. It never rattled and didn’t seem the least bit interested in us.

“I knew the desert wasn’t going to let us go that easily” stated Andy with a smile.

Tomorrow we reach Kennedy Meadows – the official end to the desert and the beginning of the Sierras.

We continued our descent into Rockhouse Basin, reaching Manter Creek just after 6pm. We had anticipated to arrive here at 7pm. We were cookin on the gentle trail.

The General – a hiker we met the night before was already set up and greeted us upon arrival. He warned us of biting red ants and where to get good running water.

Many people were already camped here, including Bridget and Alex from Austin, Texas. We met them first near Mt. Baden Powell and hadn’t seen them again til yesterday.

We got two liters of water from the creek and hiked about a quarter of a mile up the trail before finding a nice, flat spot near a large, weathered rock with lots of character.

The entire evening we watched clouds roll in. Eventually Andy put up the fly in case the weather turned.

Tomorrow, we reach the end of the desert!! What a ride it has been.

Tonight we are grateful for the PCT water report and our hats. 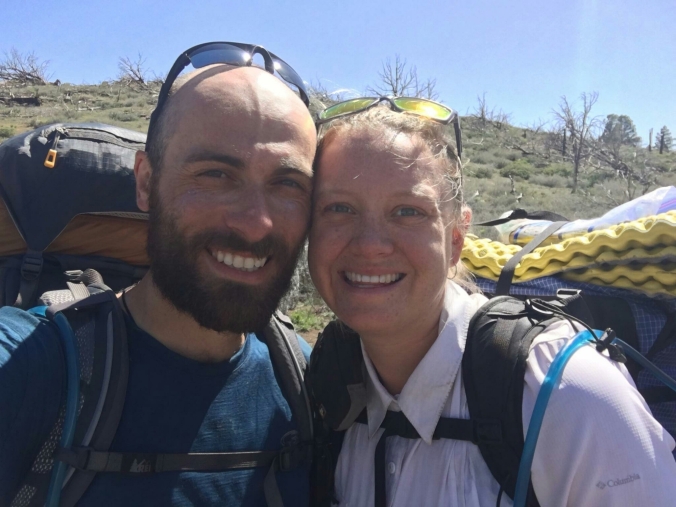