We slept wonderfully under the stars. The night was cool but our sleeping bags kept us toasty.

We were walking by 7:15am – winding our way up to Cooper Canyon Trail Camp. The trail switchbacked up, gaining about 500 ft from where we slept. The trail camp looked really nice- good potential destination of a future short overnight backpacking trip.

We continued to climb up and up. When looking at the elevation profile of the day it didn’t seem like a big deal but some of the switchbacks were steep!

Two hours and 4 miles later we reached Cloudburst Summit – our first of four Highway 2 road crossings of the day. In total we crossed the Angeles Crest Highway (highway 2) 9 times!

We dropped down and then up. We wound our way through burnt forests, thriving forests, on narrow trails and wide forest roads.

At about mile 402 we saw our first infamous poodle dog bush. Poodle dog bush is similar to poison oak but worse. If you come in contact with the bush you can break out in an itchy rash with blisters.

Sounds horrible so we did everything in our power to avoid them. We alerted one another when the bushes where close to the trail – calling out “left” or “little one on the right.” The dying plants were the most tricky since they are brown and blend in with other sticks.

Neither of us know if the dying branches can still irritate the skin. We were not about to try to find out!

We hit the 400 mile marker around 10 am (YAY!!) and didn’t get to Sulphur Spring Trail Camp (mile 406.6) until 3 pm. We took a lunch break but that still doesn’t explain why it took us 5 hours to walk 6 miles. Those miles just kept dragging on!

At the trail camp we followed directions provided on the PCT water report and encountered a very dry pipe. We were both tired, hot, disappointed and almost out of water.

There was a pool of standing water nearby with lots of algae – not very appealing for drinking. We decided to retrace our steps about a half a mile to a small body of water that was cleaner and more appealing.

As we crossed the trail camp, we ran into Corey who we had seen originally at Mt Laguna and multiple times yesterday. He informed us the spring was 200 ft down the road. We were super excited about cleanish water without extra walking!! Thanks Corey!

It took a while to get our 5 liters since the spring was just a dribble, but hey we were happy.

We continued to gradually climb past clusters of poodle dog bush. We ran into the couple from Korea and traded smiles and hellos.

The trail meandered through a forest and then opened up. We walked down a ridge gazing out at the setting sun.

Around 6:50pm we reached a campsite at mile 415. We debated whether or not to continue – both of our bodies were tired but we had set a goal of getting to the ranger station at mile 418. We agreed to push it- a decision we regretted 10 minutes later.

The trail continued down another 1,500 ft. Laurie picked up her speed, hoping to make it down before we lost light. Andy’s knees and heels were starting to protest, so he opted for a slower speed.

Both of us were upset for not listening to our bodies and for pushing when it was not necessary. We had gotten caught up in making miles rather than enjoying the experience and preserving our bodies.

We hiked on and within 1 mile of the fire station we found a flat spot free of poodle dog bush.

We quickly set up our tent and crawled inside. We cleaned our feet, inflated our mats and snuggled into our sleeping bags as the wind picked up and the air grew cold. We ate our pre-soaked dinners and had 18 Rabbits granola and Nuttzo for desert!

As Andy was cleaning his feet he discovered a big blister between his toes. (Same spot Laurie had hers). He had his first experience popping a blister. We covered it with triple antibiotic cream and a bandaid and will apply New Skin in the morning.

It was another long but beautiful day. The sunset and walking through the golden hour made every step worth it.

Tonight we are grateful for hiking poles and our companionship.

Yucca at 3 stages of growth 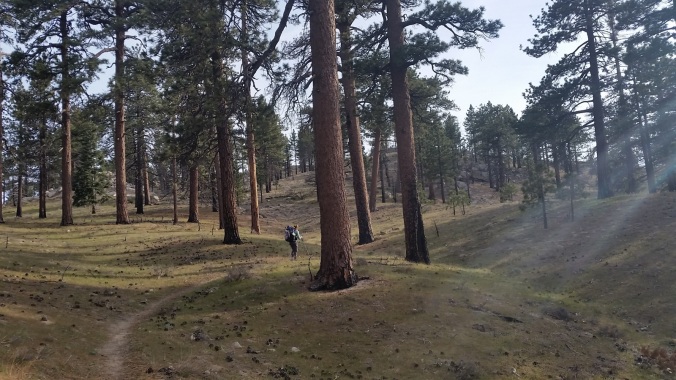 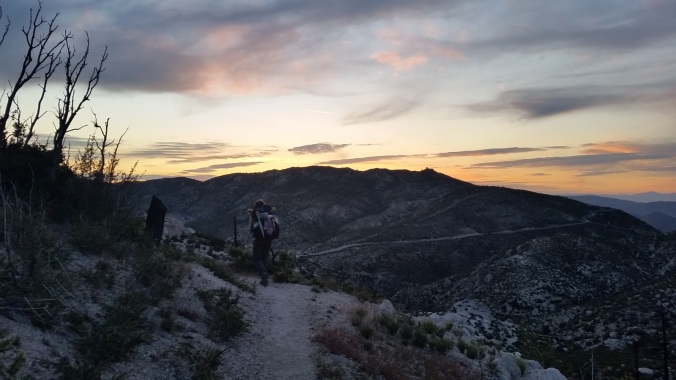 4 thoughts on “Day 30 – Enduring instead of enjoying”