We had an awesome blog post but lost it all during the upload so the following is our 2nd attempt.

The sun rose in a cloudless sky illuminating our tent and faces with an orange hue as it poured through the trees surrounding our tent. Andy woke up groggy but Laurie was her usual smiling self.

Today was summit day and we were both excited. The weather predicted sunny skies. We hiked through the forest, down to Vincent Gap – the trailhead for the 4 mile hike up to Mt. Baden Powell.

“It isn’t all going to be like this, right?” Laurie asked Andy as she slowly made her way up the first few switchbacks.

Having lived in LA since he was 7, Andy has hiked many trails in this area- purposefully avoiding the PCT except for the portion to Mt. Baden Powell.

“No, you’re almost done with the hardest part,” reassured Andy.

We climbed on, switchbacking our way up higher and higher.

One and a half miles in we came to Lamel Spring and 4 new hikers – Rambo, Ash, Bridget and Alex. We said hello and continued on to the spring which ended up being a hole in the ground with surprisingly clear water. We managed to get 1.5 liters (enough to get us to the next spring).

We continued on another mile or so until the trail disappeared under ice and snow. We had been warned this would happen but we didn’t expect it so soon. We went cross country (directly up) patching together sections of dirt to avoid the snow.

Thanks to Laurie’s trail sense (courtesy of backpacking as a child with her mom) we found the trail near the top of the ridge.

Just below the ridge Laurie ran into a branch. “Ouch” she exclaimed. She was fine. Andy, hoping to avoid the same branch didn’t see another, sharper branch about 6 inches away.  The branch sliced open his hat and skinned his head. Thankfully there was no blood so we continued on.

We continued along the ridge gazing down at the valleys on either side and watching as the sky became darker and darker. So much for the sunny skies. But as Andy always says, it’s always 50/50. Especially in the mountains.

Our sunny cloudless sky was now grey. We could see rain in the distance.

We got to the Baden Powell spur trail junction, dropped our packs and scurried up the .1 mile to the top. Without the weight of the packs we felt like we could fly!

It started to hail as we summited. We took a few pictures and returned to our packs by the estimated 1500 year old tree.

The hail intensified for a few minutes then stopped all together. We enjoyed the last of our leftovers and continued down – heading north along the PCT.

We hoped that with a different orientation this side of the mountain would have less snow. In total it did, but still had a few tricky traverses.

Andy, who is not as confident on snow, slowed down significantly. Laurie encouraged him and gave suggestions on where to place his feet. Despite all of this he slipped and fell twice – in the same spot. Laurie did everything she could to keep from peeing in her pants laughing.

Andy pulled out his microspikes and with the added friction he confidently crossed the remaining snow areas.

We ridge walked through burn areas, around rocks and through forests of pine trees. Gradually we dropped down to Little Jimmy Spring, where we had planned to have lunch, but with the benches full of hikers and no room for us, we continued down to Islip Saddle on the Angeles Crest Highway.

The trail then ascended 1000 ft and descended 1000 ft to bring us back to the Highway 3.2 miles later. This trail keeps doing that – having us climb up and down only to return to the same elevation. We don’t necessarily mind this.

The PCT is closed for 4 miles past Eagle’s Roost for an endangered yellow legged frog. Our plan was to road walk 2.7 miles to Burkhart campground and connect to the PCT there.

As we neared the road after our pointless 1000 ft mountain jaunt, Andy yelled “I hear a car!”

Without missing a beat Laurie ran the 20 ft to the highway and stuck out her thumb. A Tesla slowed to a stop and we both ran to it.

Malcom gave us a ride 4 miles up the road to the campground. We hadn’t intended to skip the last 1 mile before Eagle’s Roost but the ride was too good to pass up. Particularly since we hadn’t seen many cars on the road all day! And as icing on the cake we got to ride in a Tesla!

As we were collapsing our poles to get in the car a motorcycle rolled up. The guy had been talking with Malcom and chatted with us a bit. He became our escort to the canpround – we felt like royalty!

We are continually amazed at the generosity of strangers. It’s so great!

We walked through the campground and along the Burkhart trail for 2 mikes back to the PCT. The trail dropped down into a lush redwood grove. We crossed a river and found and spot to camp one tenth of a mile up the trail.

We were tired and this was a great looking campsite. We were home for the night.

Tonight we are grateful for trail sense and microspikes. 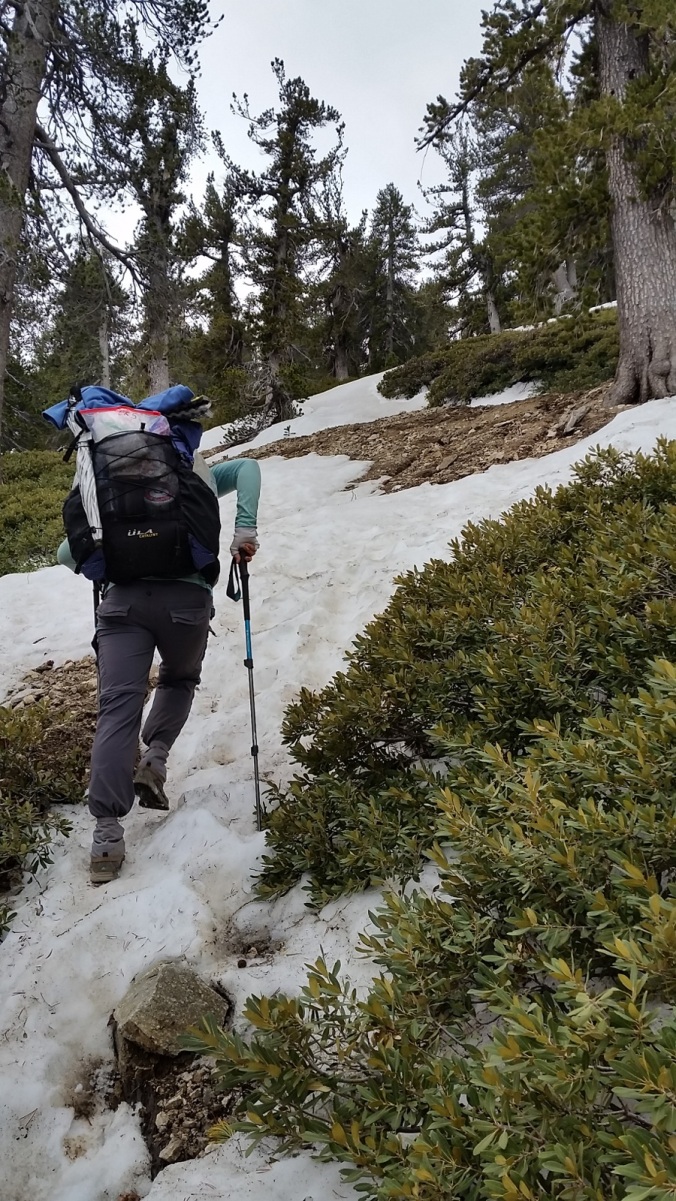 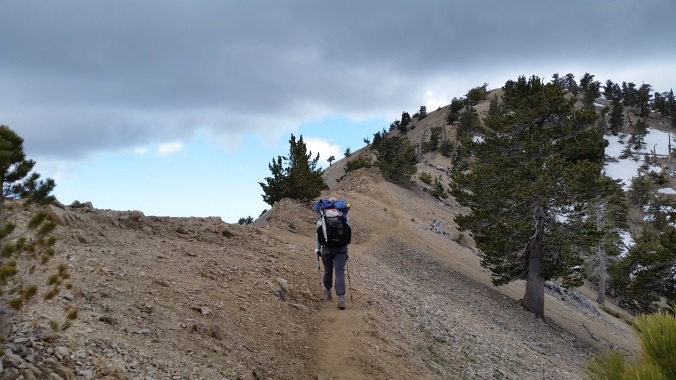 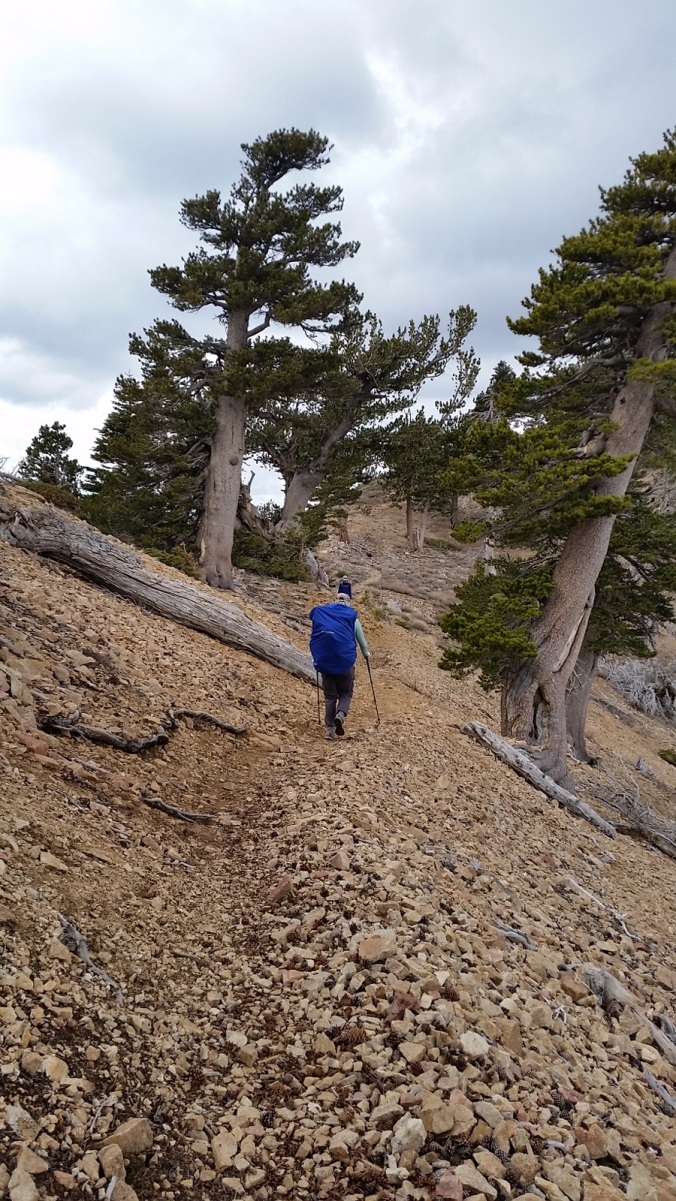 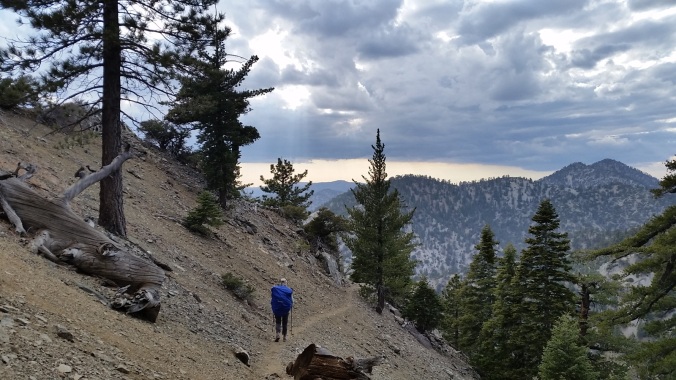