We are happy to report we did not blow away last night and actually slept very well.

Our friend Dave (Nemo) passed us around 8:15pm on a mission for chicken McNuggets and a McFlurry. It is amazing what starts to dominate your thoughts when you have spent 3 weeks in the woods.

We were on the trail by 6:45am powered by thoughts of reaching a milestone (I-15- the end of section C of California and McDonalds!). Oh, and weather is coming in too.

We got to McDonald’s at 8:15am, around the same time a large tour bus pulled in. It’s occupants made a beeline for the McDonalds and took over the bathrooms- “I guess I won’t be washing out my socks and underwear for a while” smiled Laurie.

We found an outlet to charge our phones and Laurie excitingly went to up to order her french fries and ice cream. Unfortunately McDonald’s doesn’t serve french fries or hamburgers until 10:30am- who knew?! I suppose the abstinence from McDonald’s fries will continue for another 15 years!

Laurie did get soft serve and enjoyed every bite!

We bought a new smart water bottle after Andy enthusiastically jammed a whole bunch of dehydrated lemons into one of our other smart water bottles. The lemon water was nice this morning but with the narrow opening we couldn’t get the lemons out.

Andy returned from the Chevron mini mart with a big smile on his face. He bought salt and vinegar Kettle chips and peach rings for Laurie. A true sign of trail love!

We hoisted our packs on our backs and retraced our steps 0.4 miles back to the trail. We proceeded to walk under the I-15 highway (Laurie holding Andy’s hand because it was a little spooky and dark) and out into trees on the other side. We walked under 2 railroad tracks and over 1 more.

We took some fun pictures in one of the tunnels under the train tracks – one of the joys of shorter mileage days.

We then started our climb. Fifteen miles and 4000 ft of elevation gain. The trail was gradual in some sections and steeper in others. We walked on nice wide trails for the most part and a few sections where erosion and rock slides left minimal traces of the trail. We walked on a knife edge up on a ridge and wide gradual fire roads. The only consistency was that we kept gaining elevation.

Once we started moving our aches and pains dissolved and we held a steady clip of 2.5 – 3 mph.

We were cruising along with Laurie in the lead when suddenly she yelped and jumped backwards. Hidden in a bush right next to a trail lay a rattlesnake. Thankfully he warned us of his presence but he was not happy. He continued to stare at us, tongue going in and out as he slithered away.

Not even 2 miles up the trail we saw another snake. This one more docile and sprawled out across the trail sunning itself. Since our encounter near scissors crossing (Mile 77) we have learned that rattle snakes only attack when coiled. This gave Laurie some peace of mind but did not stop her from squealing as she jumped over where the snake lay.

From there Andy took the lead. We decided that during the hottest parts of the day (and what we determined to be peak snake hours) Andy would lead.

An hour later Andy saw another snake. This one was black with a yellow stripe running along it’s side. It slithered away before Andy could get a picture and Laurie could freak out.

We stopped for an hour and a half lunch break to air out our feet. The wind picked up and it became down right cold!

We saddled up our backpacks and powered through the last 5.3 miles to camp. Laurie commented many times how pretty these mountains are. She never thought Los Angeles had mountains, let alone scenic ones.

We were delightfully surprised when we got to camp and found no one else here. Makes sense though. With inclement weather on the horizon most people must have pushed on another 10 miles to Wrightwood.

The forecast calls for a chance of showers tonight, wind gusts up to 35mph and near freezing temps.

We’re happy to be here though. We enjoy sleeping outside.

Laurie is doubly excited and has been looking forward to dinner all day. “Hey Laurie, what are you having for dinner tonight?”

“Macaroni and cheese!!” She’d reply like a gitty 5 year old.

After we ate dinner, we cleaned our dirty feet and watched lightning strike in the distance.

Time to brush up, floss and go to bed. Goodnight.

Tonight we are grateful for the warnings of rattlers and comfort food. 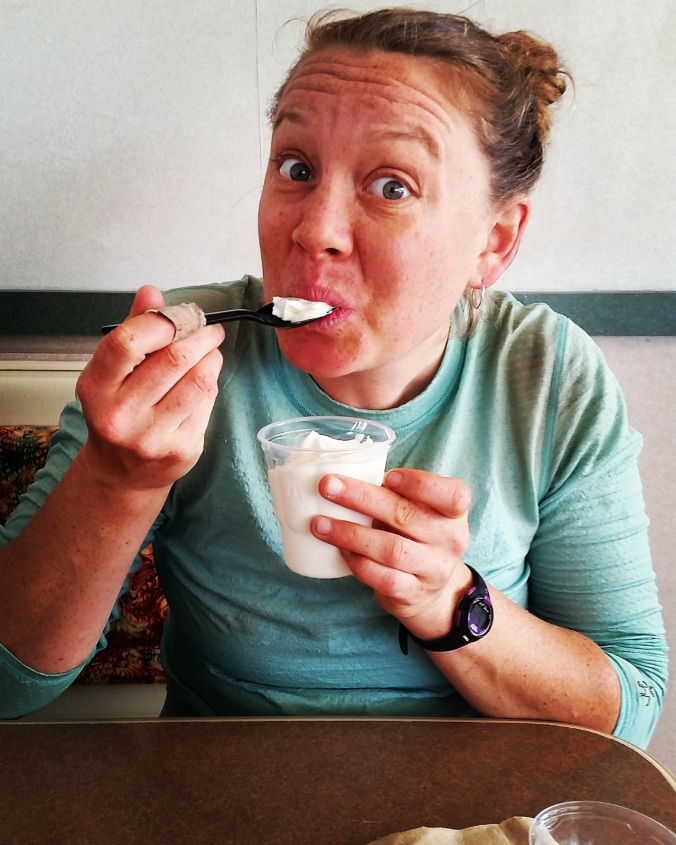 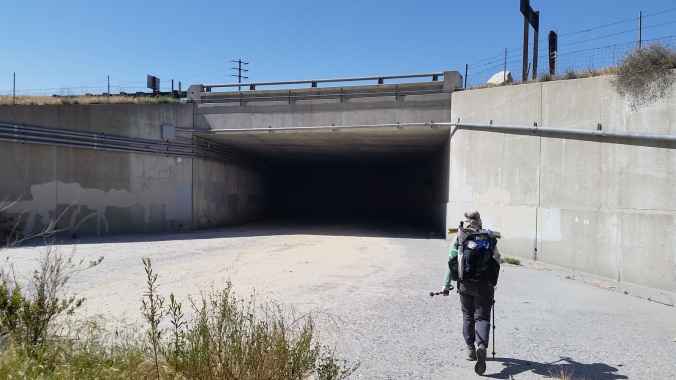 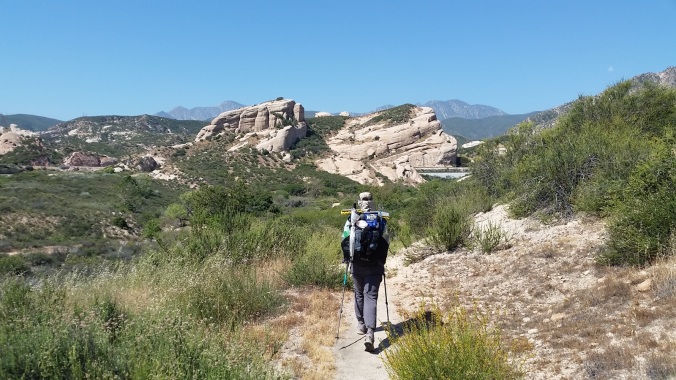 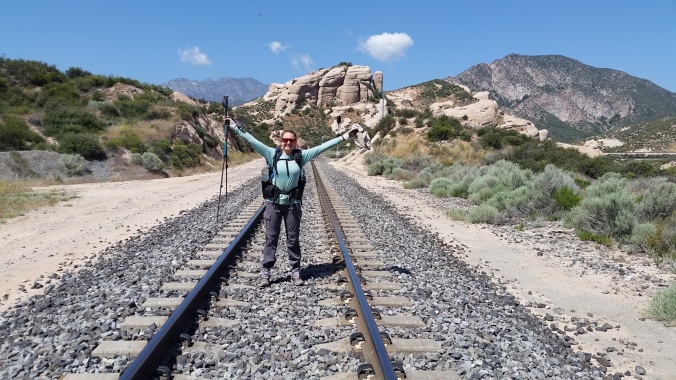 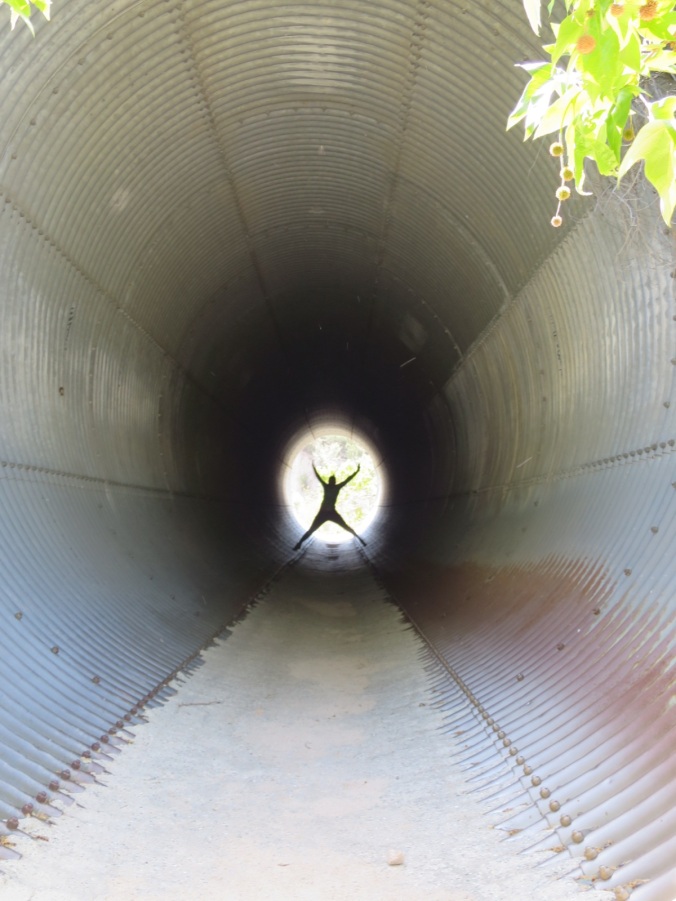 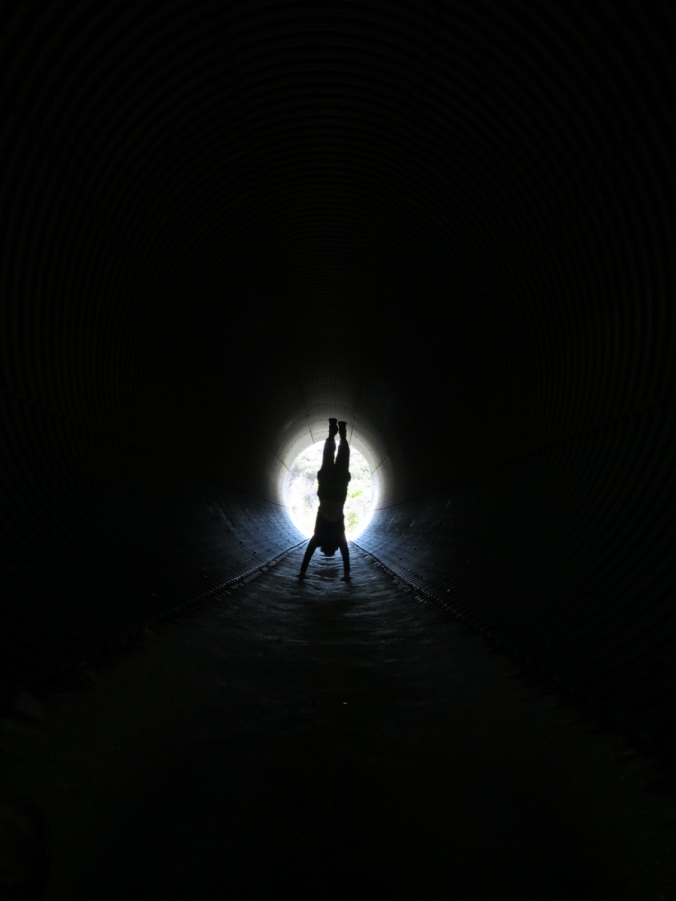 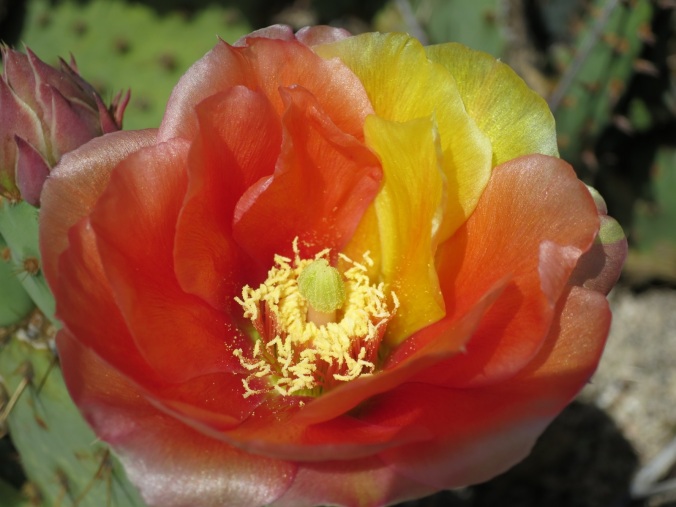 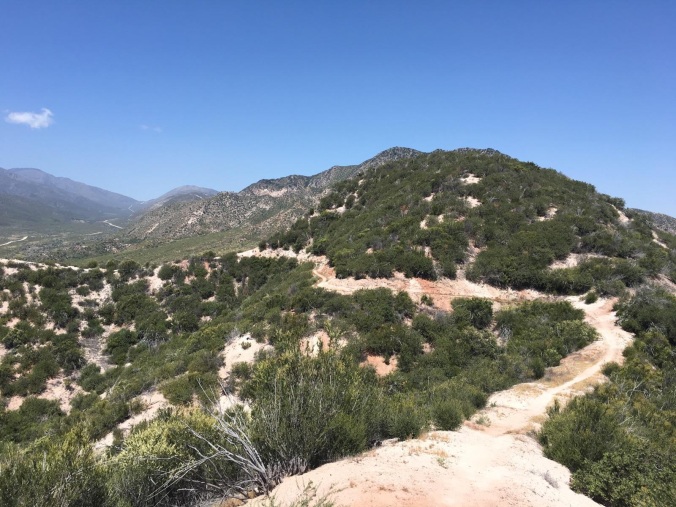 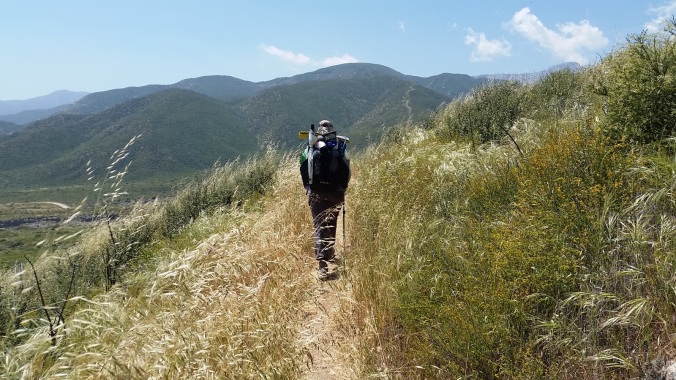 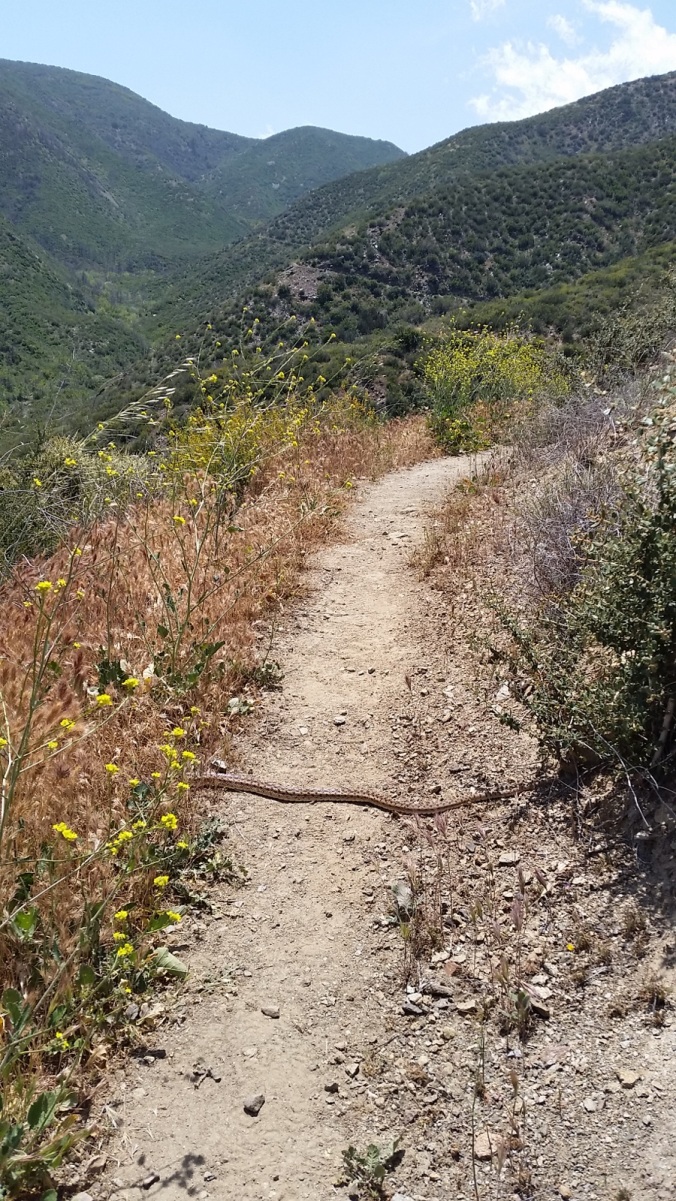 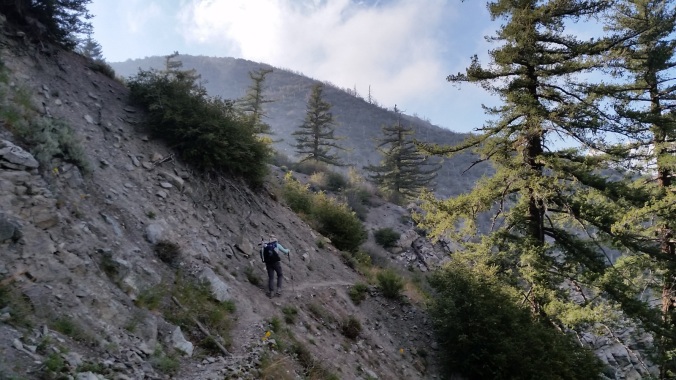 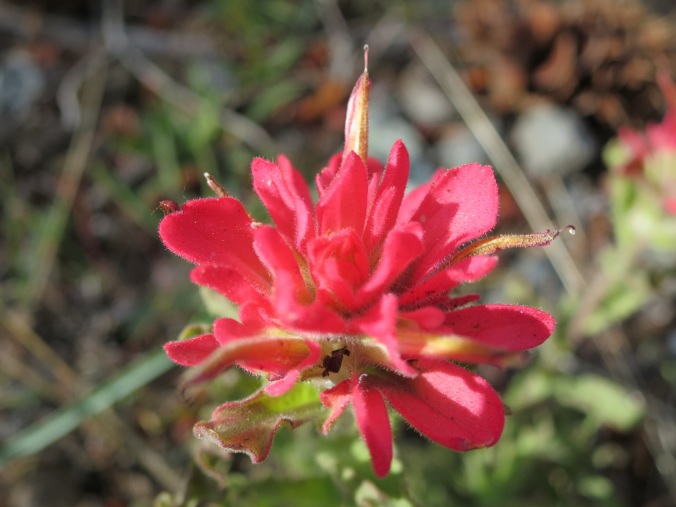 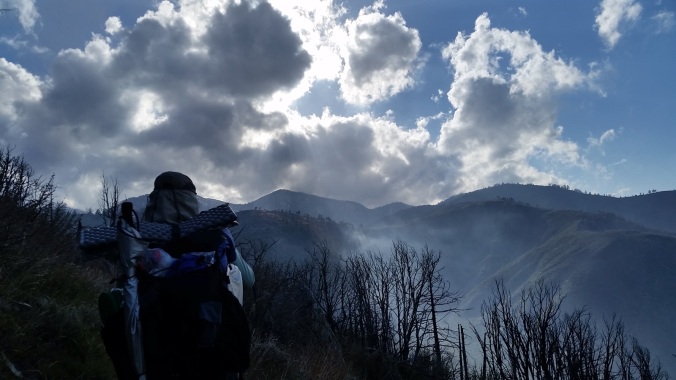 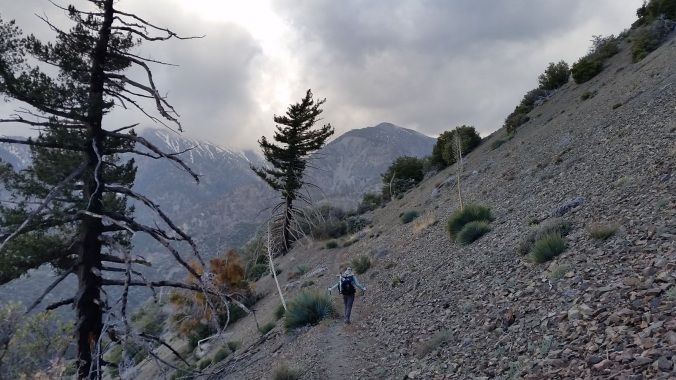 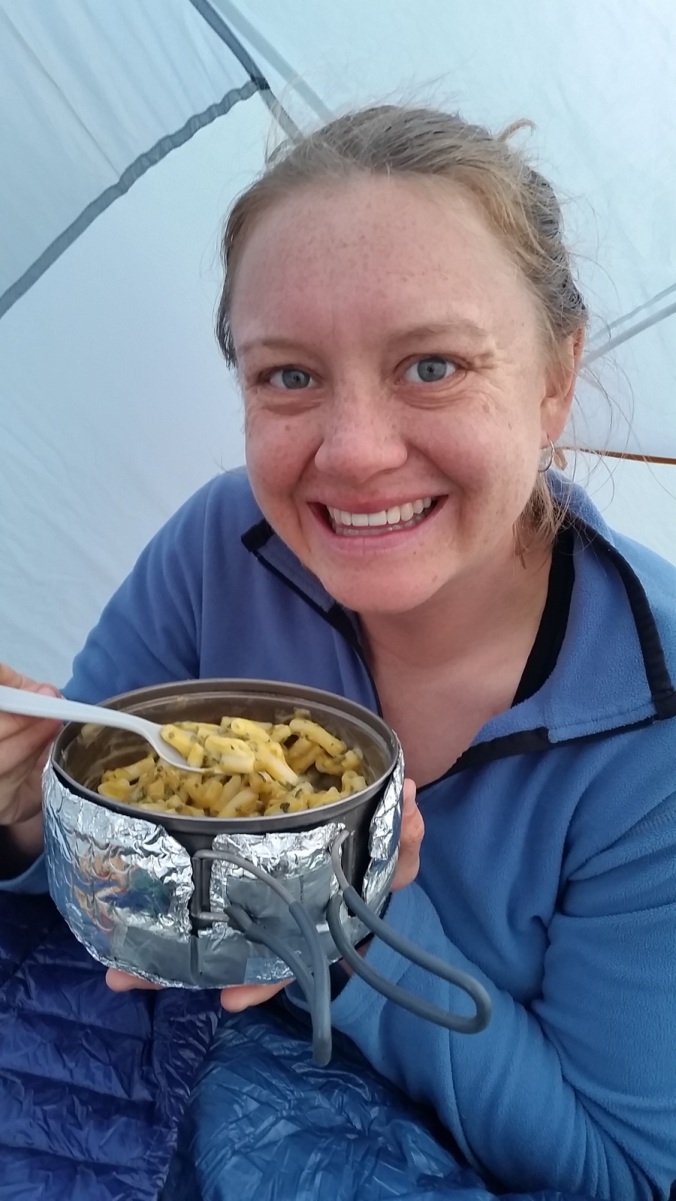 Yummy yummy in my tummy!