We woke up around 6am feeling rested. Knowing it was going to be a long day, the night beforewe had decided to get up early and be walking by 7am.

Like on the PCT, Andy got out of his bag first, retrieved our food and cooked breakfast while Laurie snoozed a few moments longer.

As the sun rose, we savored its warmth while packeding the final pieces of our gear and continued on the switchbacks at 7:30am.

When we reached the saddle we choose to bag Griffith Peak without our packs. We stashed them down the hill, chugged some water and hiked the half mile to the 11,060 ft summit.

Five years ago the Carpenter 1 fire burned a sizeable chunk of the Spring Mountains, including much of the west side of Griffith Peak. Ten years ago when Andy had been there the forest was lush. But the burnt landscape had no effect on his satisfaction for being there with Laurie.

It was windy atop Griffith Peak so after taking a few photos and signing the register we turned around and went for Charleston Peak. We exchanged pleasantries with the only other human who camped on the mountain the night before and continued along the ridge through the burn area.

Andy loved looking toward the west and into Death Valley.  He knew Mount Whitney was out there, in the distance beyond Death Valley but it was not visible in the haze.

We stopped for a snack a few miles from Charleston Peak, then continued along the burn area. The trail runner who had passed us early in the morning was now on his descent. He informed us that the weather to the peak was stellar from here on out. That was good news as the winds can be quite fierce in this range.

After crossing the last of the burn area we were able to see Charleston Peak again. “It looks so far away” Laurie said dejectedly. Andy reassured her that with no switchbacks we were less than 2 miles away. All we had to do was keep truckin’ along.

“Slow and steady.” That is the motto that Laurie’s mom used when taking her hiking as a kid. Whenever at elevation or feeling sluggish that is what repeats in Laurie’s mind.

We came to the site of an old plane crash. Laurie continued on the main trail while Andy took some time to investigate.

Apparently the plane crashed in 1955 with 14 people on board who perished instantly. Andy later described walking around the debris as very eerie. He found it strange that major components of the plane have just been left on the mountain for so long.

We kept chugging along until we reached the top of the 3rd highest peak in Nevada! We felt proud and accomplished. Andy soaked in the views while Laurie took off her pack and took a break inside the man made wind-protected shelter.

It was so well insulated she became too warm and came back out a few moments later. We snacked, took a few photos and briefly chatted with two day hikers who arrived a few minutes after us.

Before noon we shouldered our packs and began our descent to the Trail Canyon Trailhead via the North Loop Trail. Long switchbacks cutting into the mountain above treeline are still one of Andy’s favorite features.

After the switchbacks we found ourselves back into the trees and on a VERY long traverse. The drop offs along the cliffs on the north side of Charleston Peak are so immense that the trail traverses north for 4.5 miles to a saddle where one can continue on the North Loop Trail or down to the town of Mt. Charleston via Trail Canyon Trail.

Laurie lost steam as the trail wound on and on. The views continued to be spectacular and the drop offs in a few spots were downright frightening for Andy, but the heat and the long miles were starting to wear on us both.

We quickly forgot about our tired legs and the heat as we once again crossed through the beautiful orange and yellow quaking aspens. We could see this patch of color from the trail the day before and thought it was beautiful then, but it was so much more magnificent up close.

After walking through the beautiful aspens, we took a shoes-off break at Cave Spring – which still had a steady flow. We snacked, drank more water and continued onward, knowing we were only 2.7 miles from the car.

After a relatively uneventful downhill we reached the trailhead and our car.

Andy really enjoyed sharing this experience with Laurie. These mountains held some special memories for him and he was delighted to have the opportunity to come back here so many years later and experience the beauty of these mountains again – only this time together.

Today we are grateful for ‘healthy’ Pringles and downhills that eventually end. 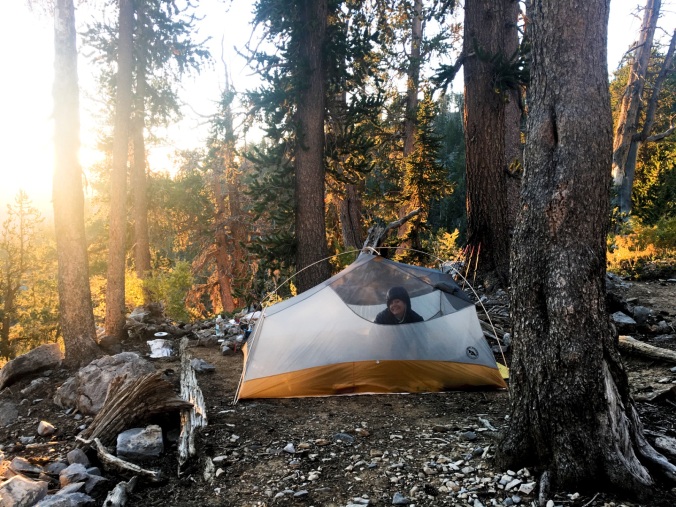 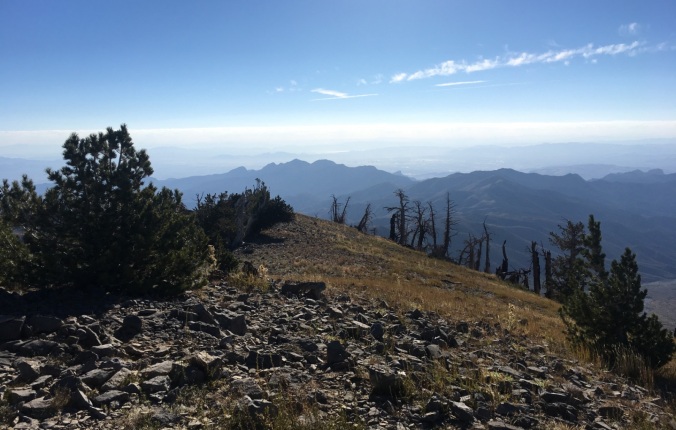 Griffith Peak (Elev 11,060 ft) and The Strip in the distance 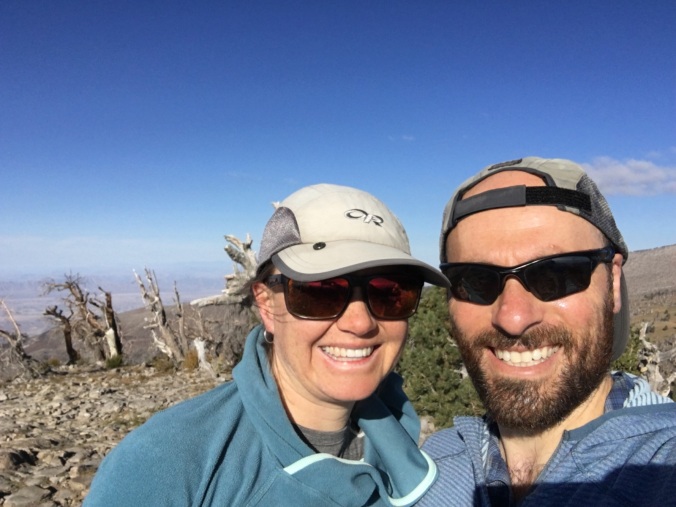 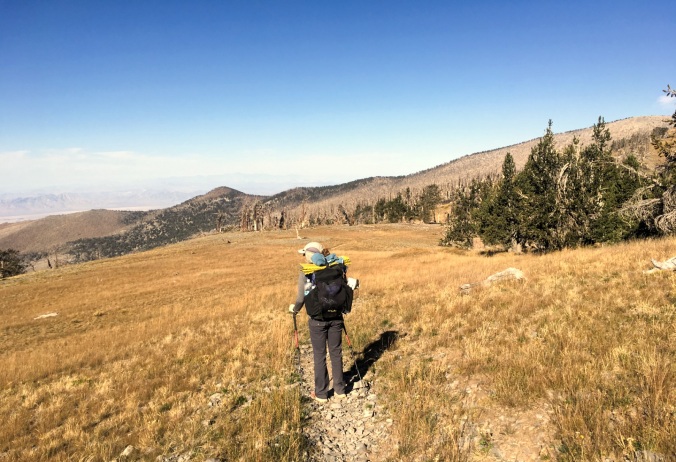 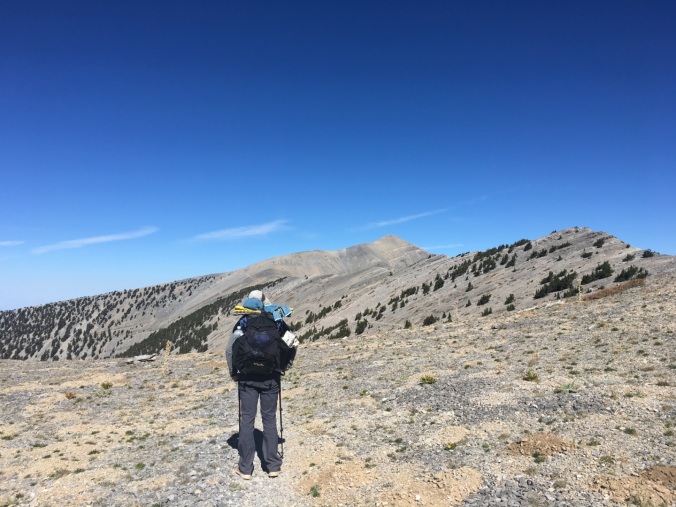 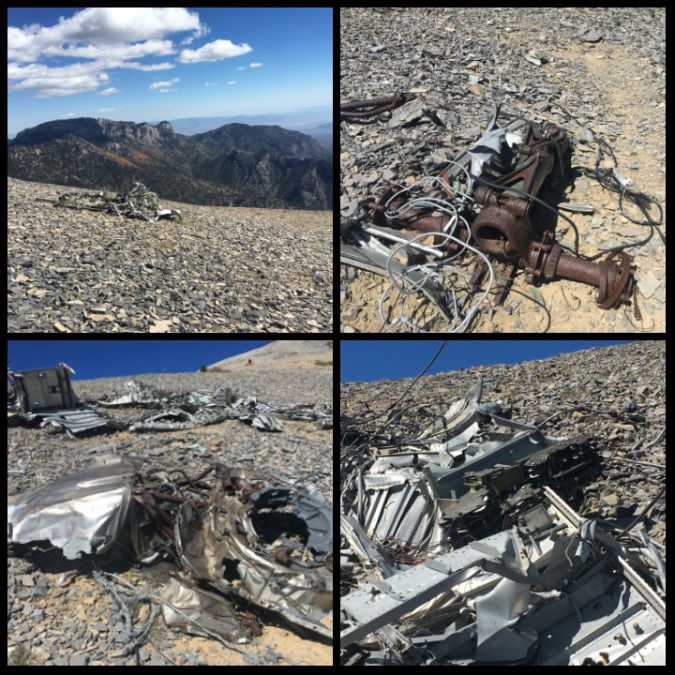 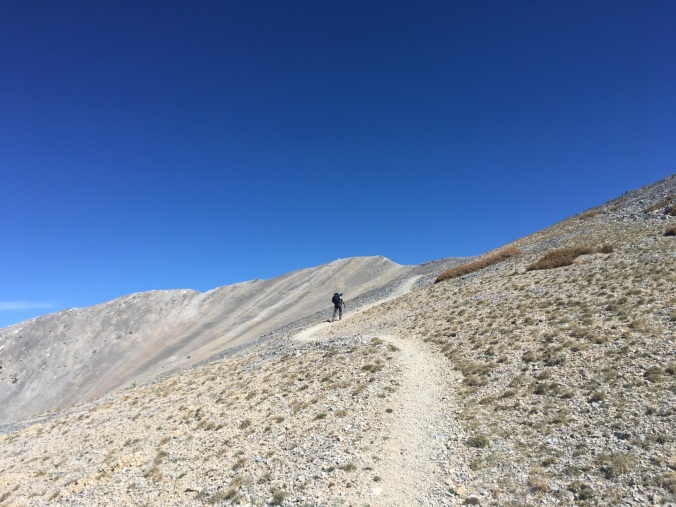 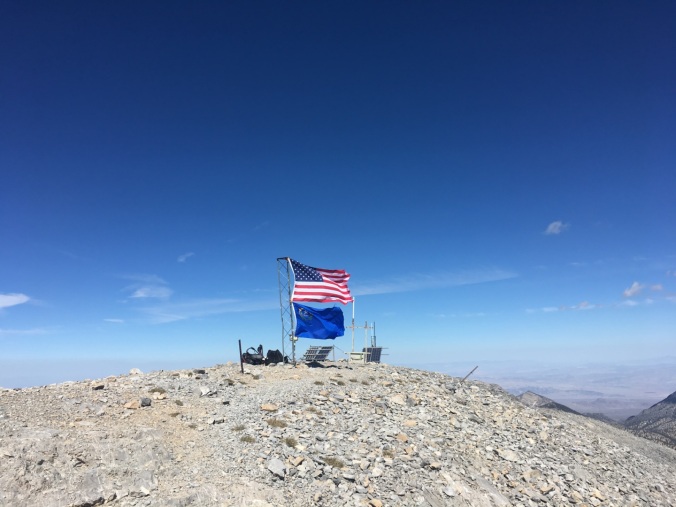 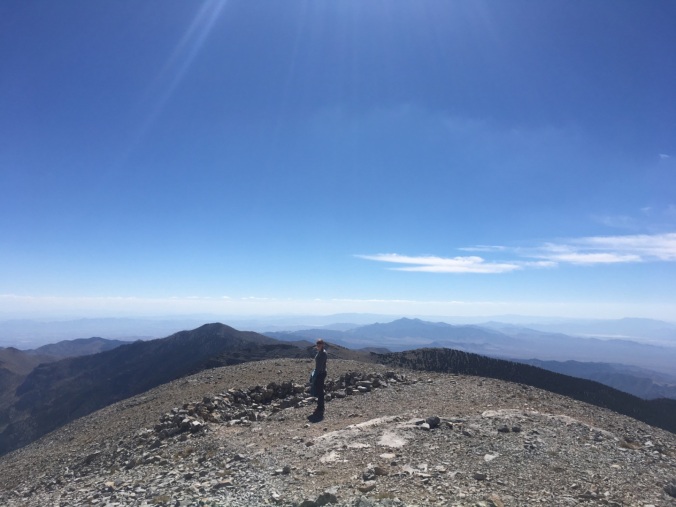 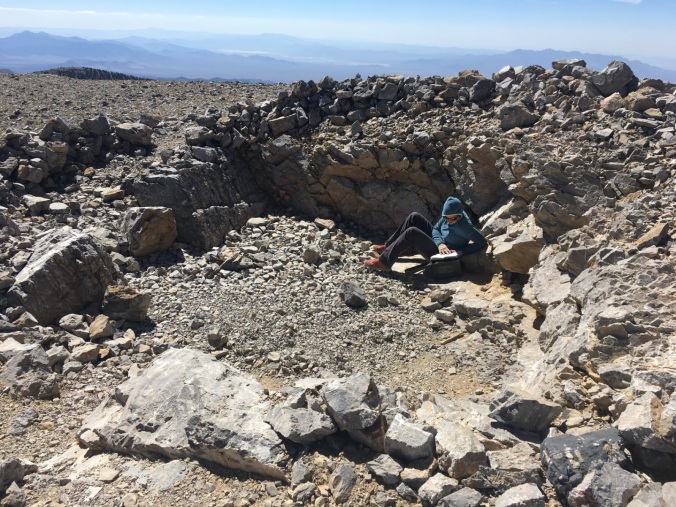 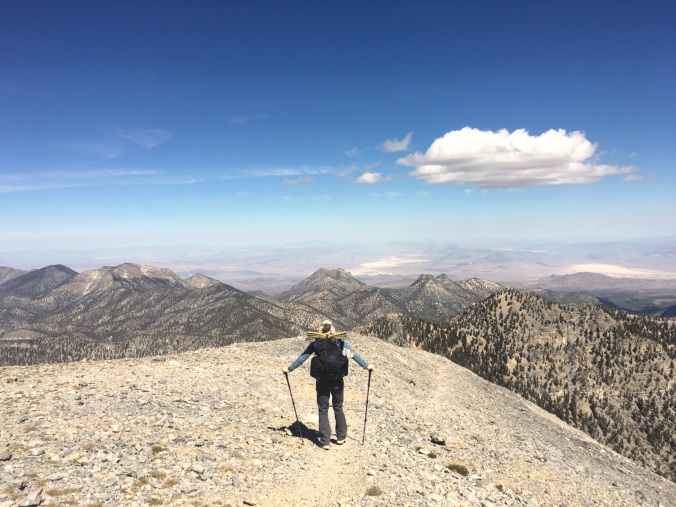 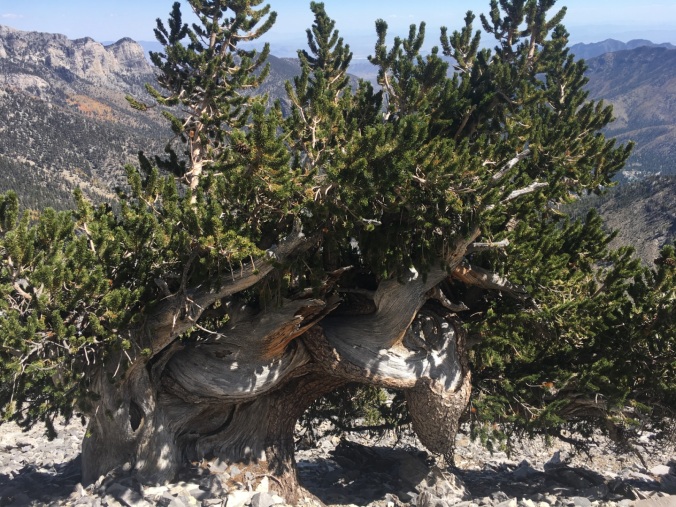 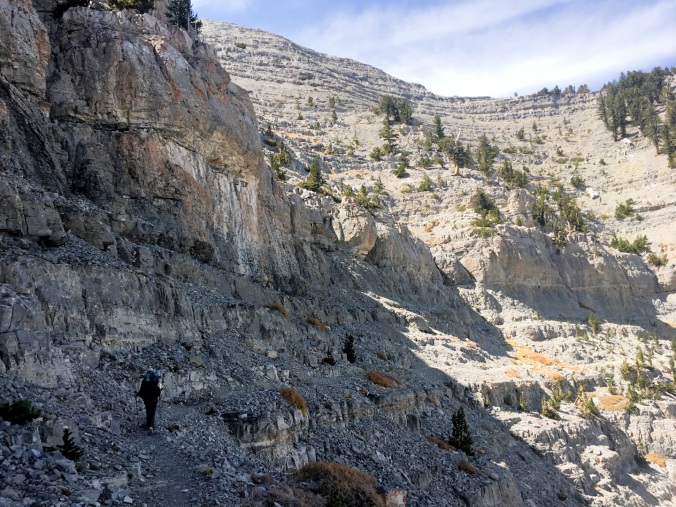 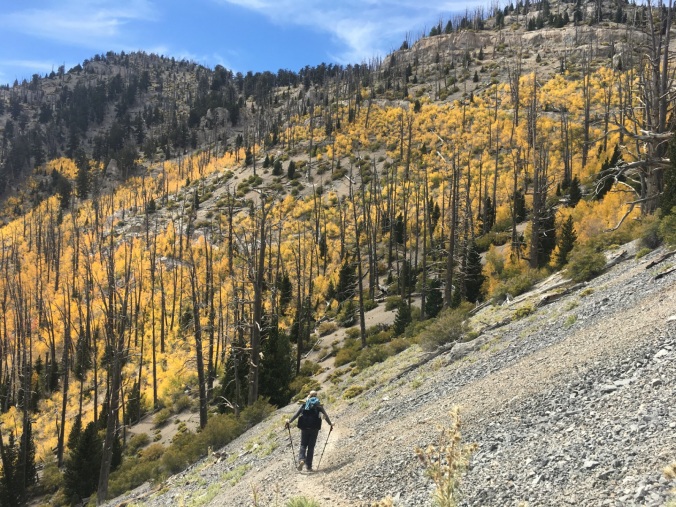 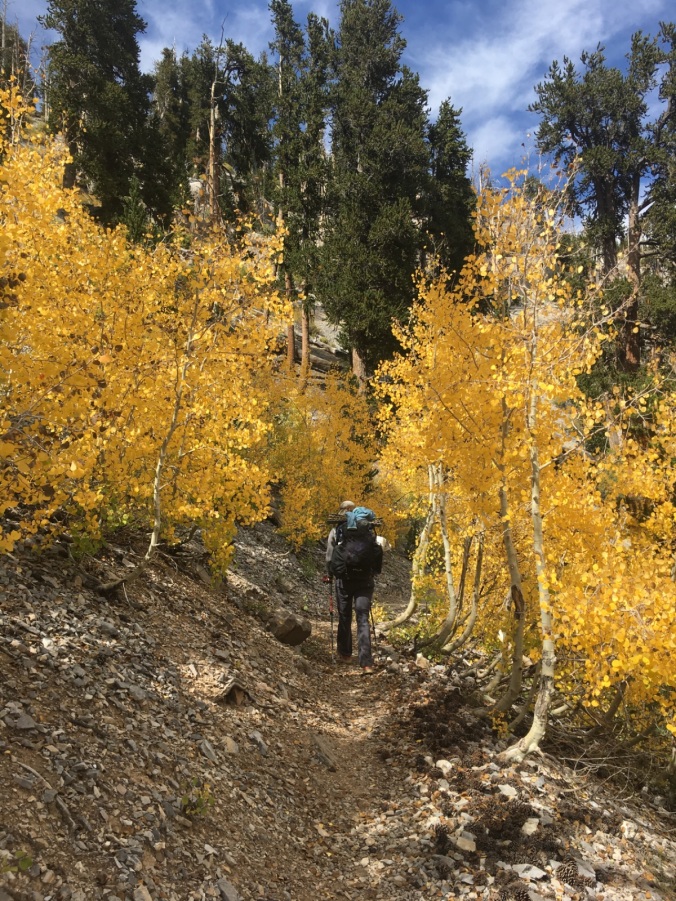 One thought on “Backpacking in Vegas – Day 2”