We had a long day ahead of us and set our alarms for 6 am with the intention to be walking by 7:30. Turns out we both slept through our alarms. Laurie tapped Andy awake just after 7 am.

We packed quickly and went downstairs for the best breakfast of our trip thus far. Fresh artisan breads, flaky croissants, yogurt, muesli, ham and an assortment of cheeses (not to mention the packets of Nutella, butter, tasty jams and honey). We were in heaven but unfortunately couldn’t eat forever. But we did manage to put quite a dent in their profit margins.

By 8:15 we walked away from La Reservé. Equipped with 2 phones and a guide book we made our way from St Niklaus uphill to Gasenried. We walked between houses and past lush green gardens, trying to imagine what it would be like to live in this city.

There was no one else on the trail. Not surprising given most people take the bus to Gasenreid or the train to Zermatt.  We strolled by goats, sheep and a bunch of alpaca.

After a long slog on relentless uphill switchbacks and old dirt roads we made it to Gasenreid and the start of the Europaweg. In a span of half an hour we passed 12 people. Still, the trail didn’t feel busy, especially when our yard stick is the JMT (or John Muir Highway as it’s often referred to).

About 10 minutes later we caught up with Tom and his daughters (the family from Maine, minus their mom, who took the train to Randa due to knee pain). It is nice to see familiar faces on the trail and it made Laurie much more comfortable to know that we were now in the middle of the pack rather than the end.

The climb through the trees was unrelenting. Tom later mentioned that this part of the trail greatly resembles the parts of the Appalachian Trail he has hiked. This validated our lack of interest in hiking the AT.

As we climbed we were quiet, both of us deep in thought. Laurie’s thoughts were about life, her goals and the next adventure while Andy’s thoughts were about the upcoming trail. He wondered when the trail would become exposed and sketchy. Was this as scary as the book described or did he have enough mountain experience to be fine?

Once above treeline, our jaws dropped.

We stood on a grassy plateau looking out at snowy mountains and glaciers with a blue sky backdrop. Laurie felt like she could frolic here forever.

“This is my new happy place” proclaimed Laurie with a smile. We didn’t have to think twice. We dropped our packs and sat on a rock, taking in the sights while snacking.

Andy took off his shirt and literally wrung it out before setting it on 2 trekking poles to dry.

After 20 minutes and 10 pictures later we climbed again toward a statue of St Bernard who is the patron saint of the Alps. The statue of him commemorates the grand opening of the Europaweg in 1997.

On the climb after the statue Laurie noticed 2 brown and beige sheep up on the hillside. They looked like neapolitan ice cream minus the strawberry. How their coats have a vertical line of color separation remains a mystery. As well as how they remain so agile on steep hillsides.

We hiked on, and this is when the trail became even more exciting. We turned a corner and gulped. There was a massive rock field filled with boulders and loose scree. It looked like there was no safe way to get across.

For the first time this trip Laurie felt scared. “We can’t get across that!” she said to Andy. “Let’s see where the trail goes.” He replied

We kept walking, following the trail as it curved around the hillside and then up alongside the boulder field. Slowly we made our way across the boulders, following colored posts and red and white blazes painted on the rocks.

Unreasurringly some of the big boulders rocked as we stepped on them but there were no sounds of falling rocks. We moved swiftly and mindfully, calling out the loose rocks and guiding each other through some of the tricky sections.

The conscious walking continued for another hour as we skirted exposed ledges and walked across more boulder fields. There were ropes to hold onto in some places, most of these we didn’t use, but occasionally they provided an extra ounce of reassurance.

It was interesting to see where each of our comfort levels lay. Andy got nervous stepping down steep sections of fine rock and dirt. These sections did not have a safety rope and it was a long 4000 foot drop to the towns in the valley below.

His solution was to sit down and scoot on his bottom. Laurie was nervous when staring at the large rock fall that obstructed the trail, however once rock hopping she remained calm and enjoyed the adventure.

In addition to boulders and ropes we crossed exposed areas on wooden planks.

The going was slow but fun. It was nice to walk on terrain that required both mental and physical strength and endurance. Plus the sense of satisfaction in the form of views were quite rewarding.

Once through what we believed to be the sketchy section, we stopped for lunch. We sat on a rock only to notice an ibex chilling about 30 feet away. He stared at us as we watched him.

The family from Maine (Tom, Helen, Jane and Natalie) caught up with us just as we were packing up to start walking again. We congratulated each other on making it through the tough section and walked on together.

The sky quickly darkened and we could see storm clouds in the distance.

“The weather forecast said no rain!” Said Laurie disappointingly. We picked up our speed, hoping to make it to the hut before the drops began to fall.

Within 10 minutes we heard the family behind us yelling “stop, stop, no rain” to the clouds. Unfortunately our wishes, and theirs, were futile.

Big drops fell from the sky. We walked even faster, speed walking down switchbacks and across the trail.

We could hear thunder in the distance. We saw a sign that said 45 minutes to the hut. “I bet we can make it in 30” egged on Andy.

As we turned a corner we came to a river. It was nothing like what we experienced in the Sierra and this one had a bridge upstream (but that required another 100 feet of climbing and descending). With rain falling our feet were undeniably going to get wet anyway. So we forged it, walking through the shin deep water.

With wet feet we continued our fast pace, traversing the green hillside walking past flowers and staring down at the towns in the valley below.

With every turn of a corner there lay another surprise. This time there was a bridge over the stream. The rain was steadily falling at this point. The bridge had a sign indicating a 4 person max. We were cautious and determined it to be a 1 person max crossing. Laurie went first, swaying with each step. She knew Swiss designs are thoughtful and well calculated but it still made her a little uneasy.

As Andy stated across thunder clapped overhead. “Great”, he thought, “just the place to be during a storm – please no lightening!”

He made it safely across and we took cover under a cement structure housing the cables for the bridge. We waited about 10 minutes for the storm to pass.

With the sun now shining we set out for the final 20 minute walk to the Europahütte. We made it to hut under clear skies, catching glimpses of the new bridge that we would cross first thing tomorrow morning. Andy got more and more excited with each viewing.

We checked in and took our shoes out to the balcony to dry, grateful we were finally there and proud of ourselves for what we had accomplished. We sat in the sun, creating shade out of chair cushions and chatted with the family from Maine until we got too toasty.

We attempted to play twister with a little girl whose family worked or owned the hut. She enjoyed spinning the dial and laughing at us as we tried to contort our stiff bodies. The game was interrupted by an ibex who came within 10 feet of the hut deck to lick the salt off the rocks. The little girl came to find Laurie and tougher they played more twister after the novelty of the ibex faded.

Eventually it was time for an underwhelming dinner of ramen soup, iceberg lettuce salad soaking in ranch dressing, and mac and cheese with mystery meat and bratwurst.

We were both looking forward to getting to our airbnb in Zermatt where we could make a massive meal with fresh veggies.

During dinner we chatted with 3 people from Ireland who have hiked and climbed all over the world. These huts are nice because they offer communal dining which lends itself to trading adventure tales. Apparently Slovenia has wonderful hiking.

We played a few rounds of Connect 4 before our Irish table mates went to bed. Laurie enticed the family from Maine to play pictionary with her as Andy blogged. For better or worse the words were in German so they made up our own words and had plenty of laughs.

The thunder, lightening and rain continued through dinner but cleared around 8:30 pm.

In honor of Swiss National Day, the owner of the hut set off fireworks around 9:45. Typically we are in bed by now but tonight was special. And what a shown it was. We were glad we stayed up for it.

Tonight we are grateful for shade while climbing and the company of wild animals at lunch.

Our kind of paradise 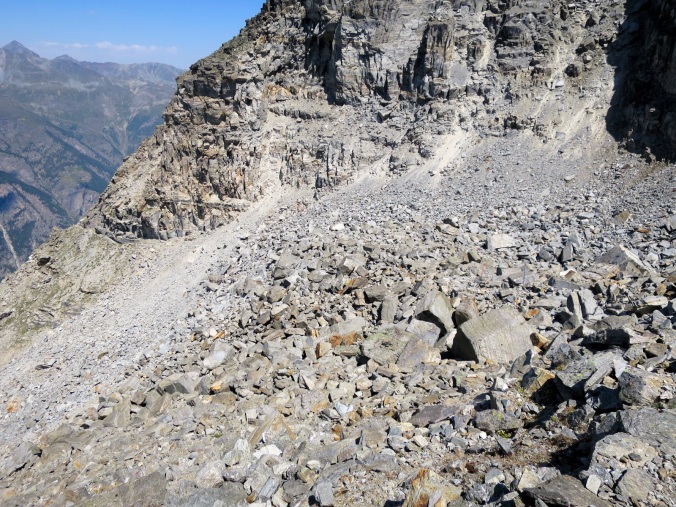 We came through that?

Grateful for the ropes! 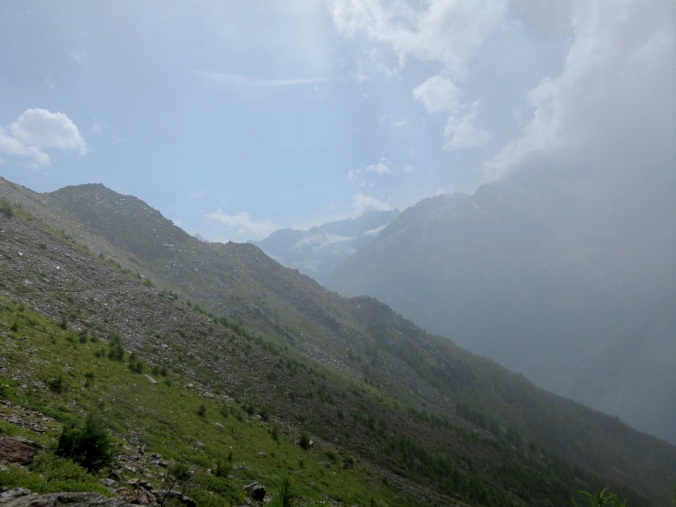 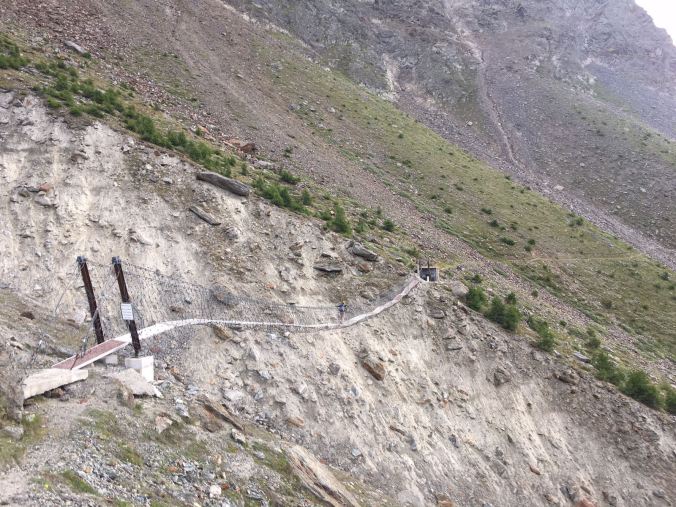 Picnic tables in scenic but random and remote places 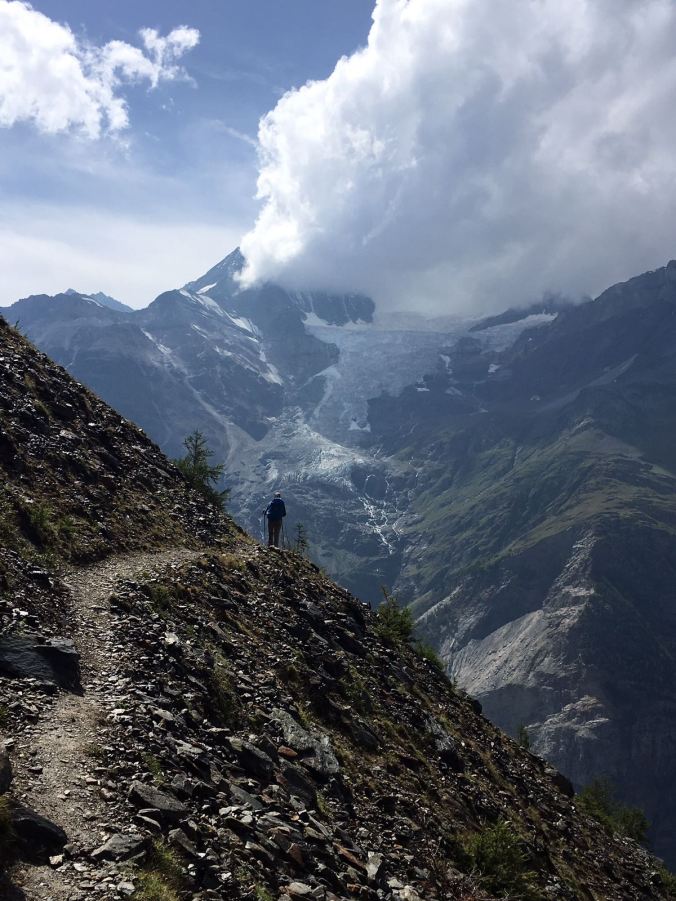