We fell asleep hopeful to wake up to blue skies. Unfortunately the gray clouds remained and as Laurie fondly describes, it was “actively fogging.”

Other hikers discussed alternate routes but we figured we would go for it and see what the mountains and sky offered.

We ate a nice breakfast of muesli with yogurt (Andy enjoyed bread as a vehicle to eat butter and jam as well), which we washed down with many cups of tea.

We set out around 8:30am. It had stopped raining but the clouds were so thick we couldn’t see the opposite side of the lake.

Luckily it wasn’t coldEdit, therefore didn’t take long for us to take off our jackets and shortly after our rain pants. The clouds continued to float in and out as we climbed back up to the trail we had left the afternoon before to drop down to Cabane de Louvie.

The snow level was lower and we followed the wet foot prints in front of us. In places it seemed like 6 inches of new snow! The rock faces around (at least those that we could see) all had a nice dusting.

About an hour into our hike we encountered our first of many boulder fields. Climbing over and around boulders is not easy in good weather, but doing so when they are partially covered in snow felt quite treacherous. We both moved slowly and carefully.

Laurie, who grew up hiking and has distinct memories of her mom encouraging her to scramble up rock faces in Yosemite, is more sure footed than Andy. She stopped frequently to encourage and provide suggestions to Andy but this was not always welcomed.

Andy became increasingly frustrated with himself, his slow pace and lack of comfort. He pouted which made Laurie giggle. This was reciprocated with Andy throwing a snowball at Laurie.

It is refreshing that we can tease each other and use humor even in times of stress or anxiety.

We continued on gradually making our way to Col de Louvie. The going was slow as the trail wound in and out of boulder fields and around exposed ledges.

Chains were conveniently bolted into the rocks at several particularly exposed areas providing a sense of extra security.

The lack of views made it easier to focus on our steps. Despite gaining 2300 feet in less than 3 miles, the hiking was more mentally challenging than physically exhausting.

Occasionally the clouds would thin and parts of beautiful white mountains appeared in the distance. It was a teaser of all that surrounded us but was obstructed by the clouds.

Oh well, we were happy to get glimpses of such beauty. And that it wasn’t raining.

We caught up with a couple from Singapore at the Col. We chatted a few minutes before both taking off to avoid getting cold.

We descended from the Col toward the Grand Desert. Below us lay glacier terrain and tarns.

We dropped below snow line and continued to follow the red and white paint blazes and cairns as we weaved our way down to the basin.

From here it was a series of smaller ups and downs before our final ascent to Col de Plafleuri. The walking was easier because of the lack of snow and exposure. Both of our spirits lifted as did our speed.

As we crested one small hill a huge glacier lay to our right.

“Hurry up! You have to see this before it disappears!” Laurie yelled to Andy.

Andy turned his whole body to look at it. His neck has been very stiff today. Sudden movements are painful.

Before we knew it we were at Col de Plafleuri. At 9,700 feet, it is an impressive pass. The views on a clear day must be really spectacular.

Kai and Huy (the couple from Singapore) greeted us at the top. We took a few pictures for one another and headed down the pass.

Not surprisingly our descent was very steep. Laurie headed down quickly while Andy took a bit longer.

We wound around tiny switchbacks which Laurie felt would be awesome if she were an ant on a bicycle. Part of her is still riding on the smooth twisty mountain roads of the French Alps.

We hiked through an old query site before reaching the Cabane de Plafleuri. Contrary to the stats, it felt like a tough day and we were happy to be done.

Upon check in we discovered that they had canceled our reservation 3 days prior when Andy had called to confirm, like they ask us to do.

In the end it didn’t matter as there was room in the hut. We got settled in our dorm room (9 mats lined directly next to one another), used wet wipes to clean up (after hiking the PCT we don’t feel like we need a shower, especially one we have to pay 5 Swiss Francs for).

We went downstairs to the dining room to look at our route for tomorrow and to try to be social.

By this time the English couple had arrived so we chatted about various things until it was time for dinner.

Before serving food one of the gals read the weather report “Cloudy and rain tonight. Cloudy tomorrow morning. Sun in the afternoon but very windy.”

Hopefully we will have some decent views tomorrow.

We had another 4 course dinner consisting of soup, salad, beef stew, rice and canned peach with whipped cream.

With full tummies we retired to our dorm around 830 pm and were asleep by 930.

Tonight we are grateful for sure footing and warm soup.﻿ 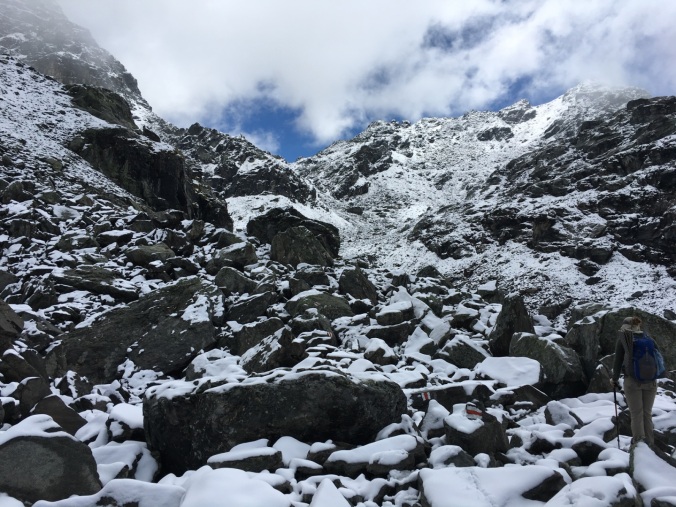 This is why we were hiking 0.5 mph 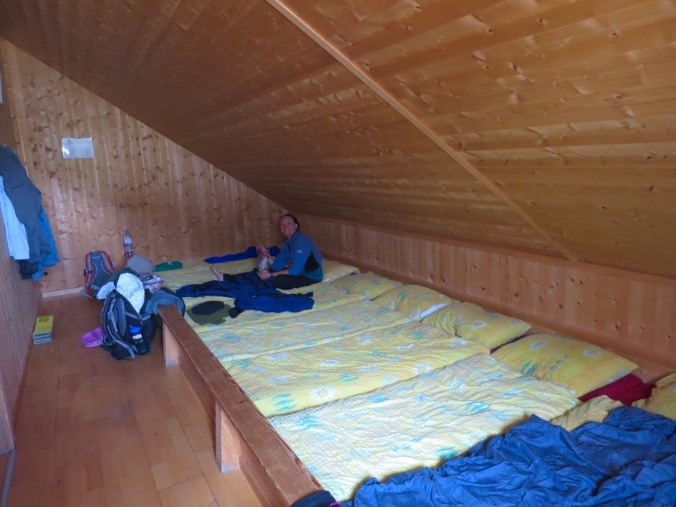 The beds aren’t as wide as they seem