At some point we finally stopped caring about the elk outside our tent and went to sleep. But Andy didn’t sleep well. He woke up many times with tight IT bands.

We watched the morning light coat the mountains around Hopkins Lake. We were eager to get to the border but also wanted to enjoy our last morning in Washington.

The clouds dominated the sky but occasionally the sun poked through. We walked through the forest, trying to make sense of our emotions.

Today we would reach the northern terminus of the PCT. For most this is the end of an exhilarating journey, for us it is just another milestone.

An important one and one that Andy has dreamed about for years, but because our journey isn’t over the monument felt less momentous.

The trail was overgrown and we clambered over down trees. About 2 miles from the monument we met Mountain Sweep, a woman in her 60s who has been section hiking the PCT for 16 years.

This was her final section and her children were hiking in to meet her the following day.

Around 8:50 we came to a clearing. The clear cut that marks the border between Canada and the US was evident.

“We are so close!” said Andy beaming.

After 3 quick switchbacks there it was.

A monument very similar to the one we had stood on just under 5 months ago.

We paused, hugged, signed the register and took pictures.

As anticipated, seeing the monument was anticlimactic. Our journey wasn’t over. It felt like we had the book ends of our story but were missing a chapter.

From here we walked 8 miles to Manning Park, a small resort in British Columbia and the first place resembling civilization in Canada.

Our “trail” was a combination of hiking trail, fire road and mountain biking trail. They were all through the forest and although nice, nothing special.

Another hiker had suggested that we summit Mt Frosty on our way to Manning Park. We were tempted but with the poor nights sleep Andy was over it. “I don’t want to climb anything, I just want to get there.”

We were both tired, not looking forward to the long journey back to LA and apparently not in the mood for more walking.

We got to Manning Park around 1 pm, showered, did laundry and ate a celebratory lunch.

With full stomachs and semi clean bodies (we took cold showers with no soap) we began to discuss our options for getting to Seattle.

We had booked a 6am flight from Seattle to LAX on Sunday. It was Friday. There is a Greyhound that runs from Manning Park to Seattle everyday and it leaves Manning Park at 1:50am.

We had not made advanced reservations to allow wiggle room in case the weather changed. It never occurred to us that Greyhound buses sell out but apparently they do in Canada in August.

We heard from other hikers that the previous night there was only 1 seat available. Other employees mentioned that sometimes the bus doesn’t stop. Depending on this bus started to feel less reliable. So we turned to our only other option.

Laurie stepped out of her comfort zone and started talking with everyone. She asked a woman coming out of the restroom if she was heading west.

We were off of a smaller highway and any western movement would bring us closer to more populated areas.

The woman responded that she wasn’t sure what she and her husband were doing but asked if we had just gotten off the trail. When we said yes, she responded with “my husband wants to hike the PCT, wait here.”

We waited while making a large hitching sign on our Tyvek.

We chatted with Stephen and Katherine for about 10 minutes. They were planning on staying at Manning Park but there were no available rooms. They weren’t sure where they were going next but said if they saw us on the side of the road they would pick us up.

After 15 minutes of unsuccessful hitching, they pulled over and we piled in. Stephen and Katherine were amazing trail angels. They drove us 2 hours to Abbotsford (the closest border town in Canada), treated us to dinner and then drove us to the Greyhound station.

All the buses from Abbotsford to Seattle were sold out.

“Well, I am glad we didn’t wait for the bus!” Laurie said as she turned to Andy.

Had we waited in Manning Park there would not have been room and we would be hitching anyway since our flight departed earlier than the arrival of the next bus.

We inquired about buses leaving from Bellingham to Seattle. There were 3 per day and the 4 pm bus had 4 seats available – the first two buses were sold out.

We had planned to have Stephen drop us off at the border so we could walk through without them having to deal with exiting and then re-entering Canada but they insisted on driving us all the way to Bellingham.

We had no other words for Stephen and Katherine besides ‘thank you, thank you!’

As we pulled up to the customs agent Laurie felt herself getting nervous. We had all the paperwork we needed but it still felt uncomfortable to have to explain your actions and reason for being somewhere.

When asked where we lived Andy responded with “we last lived in San Francisco.”

“Last?” Was the follow up question from the agent.

“Well we have been living in our tent the last 5 months” chimed in Laurie.

The agent smiled. She looked at Andy’s passport photo (bald and with minimal facial hair) and then at his bearded face. “We see a lot of you PCT hikers, you guys don’t look so bad.”

We all had a good laugh and were good to go.

We watched the pink evening glow on Mt Baker and were treated to an amazing sunset as we drove through the agricultural land of northern Washington.

Stephen and Katherine dropped us off at Motel 6 where we got the last non- smoking room.

We feel so grateful to have met Stephen and Katherine and greatly appreciate their generosity.

Stephen wants to do the PCT in the next few years and we look forward to helping him plan his journey and ideally along the way as well.

The generosity of strangers continues to amaze and baffle us. People want to help us succeed. And as we’ve mentioned before, we simply have to be brave enough to ask for and be willing to accept help.

Had Laurie not stepped out of her comfort zone and asked a stranger for a ride, who knows how things would have turned out.

Because of her courage we got to meet and spend 4 hours with a wonderful, caring and generous couple.

We love the world we live in!

By 9:30 we had crawled into bed. Laurie was so tired she wasn’t even tempted to turn on the TV in search of Romantic Comedies. The sound of the freeway didn’t bother us either.

Tonight we are grateful for kind people and border agents with a sense of humor.

Making us work to get to the border! 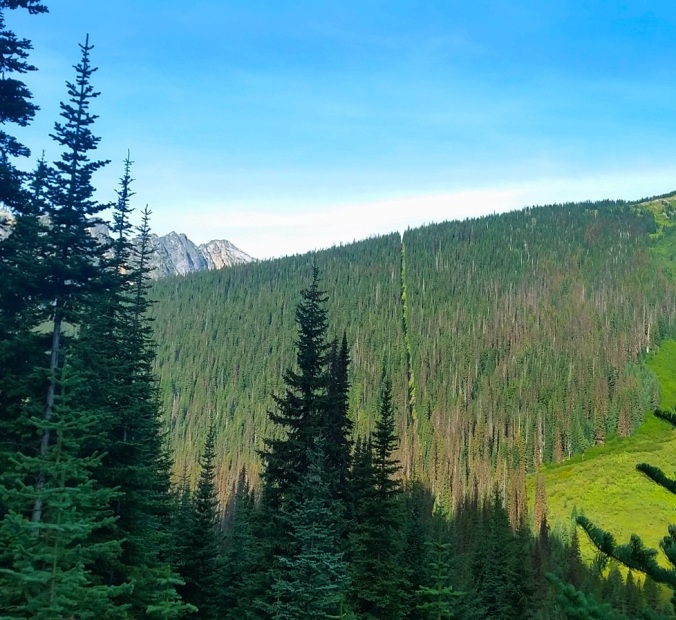 The infamous clear cut marking the US and Canada border 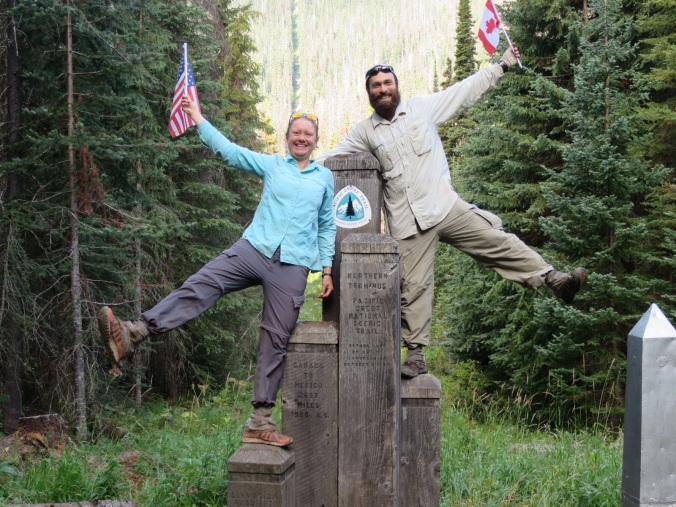 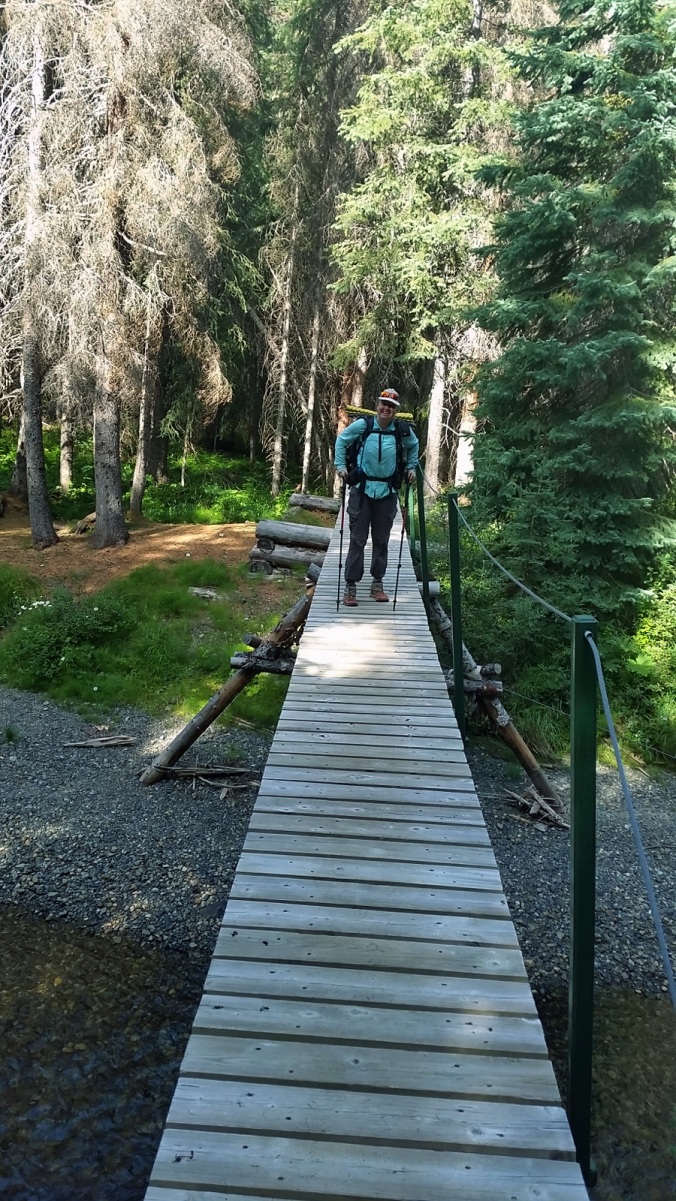 We cannot thank you enough Stephen and Katherine