We woke up early to watch the sunrise. It was hard deciding where to look since we had a 180 degree view of three volcanos (Mt Adams, Mt St Helens and Mt Rainier).

Laurie enjoyed a double cup of hot chocolate while Andy drank tea. It was cold but our hands and hearts were warm. Moments like this are so special on the trail.

We watched as fog rolled into the valleys below and pink morning light graced all three mountains. It was going to be a beautiful day to cross the Knife’s Edge.

We packed up our camp (Laurie took a short nap while Andy shuffled) and we started hiking around 8:30.

We headed up towards Old Snowy, excited for what the trail would bring.

We traversed some icy snow but we were steady on our feet. We climbed up shale switchbacks, gaining what felt like 500 feet in less than one mile, stopping frequently to take in the views.

It was almost surreal. We had unobstructed views of Mt Rainier and various snowey and green mountains in the foreground.

We opted to take the old PCT up towards Old Snowy for the full experience and because it looked to be the safer option.

The stock trail stayed lower and looked scarier with a longer snow traverse and much steeper drop off.

From the top of Old Snowy we started to descend down the Knife’s edge. We were literally walking down the spine of a mountain.

The switchbacks were steep and slippery; at times it looked like the trail just dropped off the cliff.

There were moments when both of our heart rates quickened, particularly when Andy slipped and fell. His backpack took the brunt of the fall but he managed to get two gashes in his left hand.

They were just flesh wounds. He’ll be fine.

Laurie helped bandage him up and we continued on. We could see the trail slithering down the ridge ahead of us.

This trail followed the spines of mountains for a little over 2 more miles. We kept looking for mountain goats and saw two very faint white specks moving far off in the distance.

We walked steeply up, then steeply down, taking in the views and being careful not to slip. Finally around 11 am we reached the Coyote Trail junction, marking the end of the Knife’s Edge. It had taken us 2.5 hours to walk 2.4 miles. Go us!!

And for this reason we can never keep up with other thru hikers – we take our time in the pretty sections!

We continued to descend through flowering fields and passed patches of snow. We drank out of streams stemming from the snow patches above.

Around noon we stopped for lunch. We were headed back into the trees and wanted to enjoy the flowers, sun and bug free dining one last time.

After lunch we continued to descend another 2000 feet into the trees. We hiked together but in silence, both still in awe of the last 24 hours.

This section has become our favorite of the trip. We had impeccable weather and are so glad we gave ourselves extra time to enjoy the views.

Around 5:30 we passed by beautiful Shoe Lake. We were trying to decide where to camp for the night. Our plan was to get to Ginnette Lake to make for a short nero tomorrow and maximize our time in town before hiking out that same afternoon.

As we crossed over a ridge Andy saw a cell tower in the distance. Upon turning on his phone we learned that Nemo, a friend we last saw in Wrightwood, had passed us and was now in White Pass. We had been looking forward to hiking with him and were tempted to push all the way to town.

But we knew ourselves. If we got into town tonight we would stay up way too late catching up with him, not getting a good nights sleep and falling further behind on our blog.

So we stuck with our original plan with hopes of catching up on our blog so we would have more time to chill the following day.

We gently descended through a field of rocks. Laurie led and was staring at the ground when Andy gasped behind her.

She looked ahead and saw about 8 mountain goats grazing by the side of the trail. We stopped to watch. Goats in the goat rocks! Now our day was complete!

The young one kept staring at as and would start running, often running into one of the other goats.

Up on the hillside were another 8 or so goats lying down. We slowly walked by them as they grazed their way up the hillside.

We got to Ginnette Lake around 7 pm. A woman, Rambo, was already set up with her dog Sadie. We joined them and chatted. Rambo hiked the trail last year and was just out for one night with her dog.

The mosquitoes were out but not fierce. Laurie still crawled inside the tent while Andy made dinner.

We ate in our bug free oasis as Rambo and Sadie played fetch.

As we were working on our blogs Andy shifted his weight and we heard a sudden POP.

Ugh, it was the familiar and unwanted sound of one of the baffles on his pad bursting.

We try to take good care of our gear, what are we doing wrong? Should we not sit on our pads? Is the uneven weight distribution too much?

Last time this happened the following night another baffle popped and then Laurie’s pad popped the next night. We didn’t know if it would be a repeat of last time but we didn’t want to take any chances.

While all this was happening Rambo had changed her plans as well. Rather than doing trail work she was going to go back to Olympia to pick up her boyfriend to go hiking.

And guess what? There is an REI in Olympia! Rambo offered to give us a ride to REI and partway back up toward White Pass.

This was an unexpected end to an absolutely stunning day. But hey, gear doesn’t last forever and we feel very fortunate that this happened somewhat close to a town.

Tomorrow will be an urban adventure, but tonight we hope Andy is able to get some sleep.

Tonight we are grateful for warm beverages and the amazing work of trail crews. 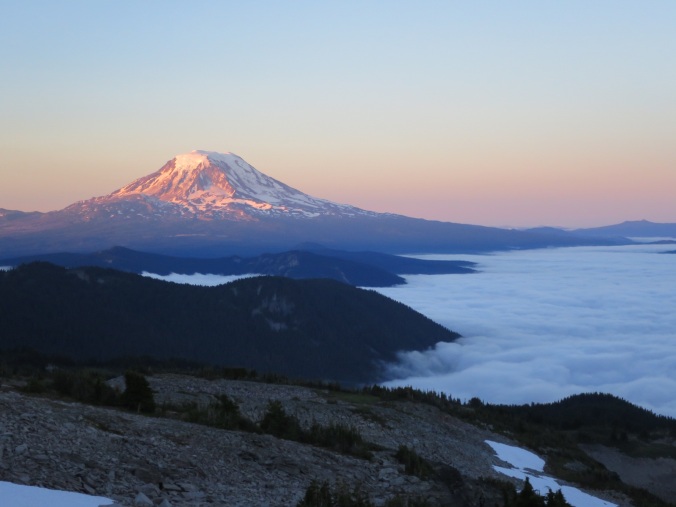 A little challenge before Old Snowy 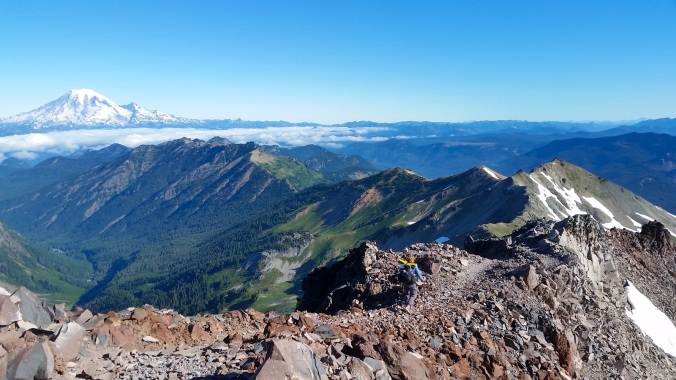 Yup, that is the trail. 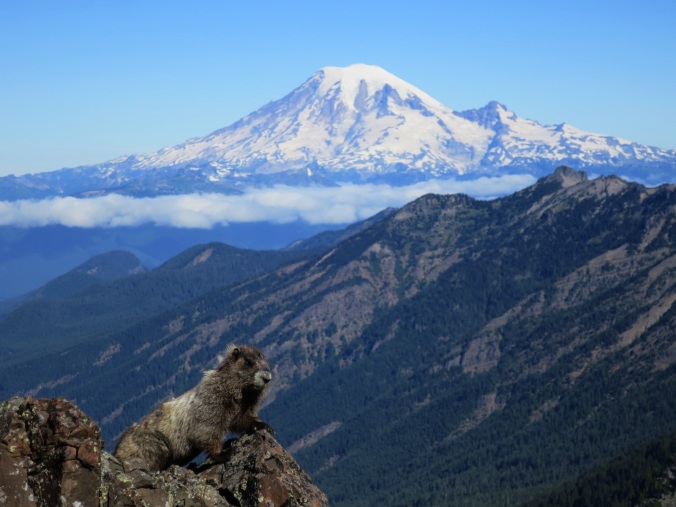 Looking back at the Knife’s Edge and Old Snowy

Mountain Goats in the Goat Rocks!