Andy woke up at some point in the night to the sound of critters scurrying about and our Talentis falling over.

He didn’t worry. He never worries. He figured all of our food was safely hanging in the Ursacks in a nearby tree. So he went back to sleep.

Laurie heard nothing. She slept soundly through the night.

Washington has a reputation of having steep ups and downs. Only one day in and we can feel the difference!

Immediately out of camp we started to climb. Clouds hung in the sky and neither of us wore our sunglasses or hat.

We climbed up 2600 feet, trying to avoid stepping on the many slugs that moved across the trail. Even Andy, who normally looks up or straight ahead, resorted to staring at the ground to avoid squishing them.

Once at the top of the climb we immediately started to descend. This seismic topography is hard for Laurie’s knees.

Andy offered to take her food bag, which significantly lightened her pack in hopes of preventing further inflammation.

“We are a team. I want to finish this trail with you. Me taking your food doesn’t make you a weak hiker” Andy reassured Laurie.

We walked down through the temperate rainforest, past large ferns and mushrooms down to Trout Creek.

We took a 20 minute shoes off break before continuing on. One thing that Washington does offer is dirt free toes and for that we are grateful.

The trail mellowed out and we cherished the moments of flat ground. We reminisced about the level terrain in Oregon.

We crossed over the bridge at Wind River and Laurie looked longingly at the river. We had talked about minimizing our breaks today so we didn’t get into camp too late, but the clear water was too tempting.

Fool, a thru hiker who is out to complete his 2011 hike, was down at the river also. We chatted a bit, soaked our feet and quickly began to sweat as the sun roasted us as we put on our shoes.

We hiked through the shade of the forest another 2.5 miles to Panther River – our last water for 10 miles. We were planning on dry camping at the top of the climb so carried extra water to cook.

From here we went up 4000 feet over 9.3 miles. The first mile was comprised of steep switchbacks, so steep that our quads burned!

A mile and a half into the climb Andy spotted a snake spread across the trail. Initially we thought it was a big slug. Andy moved the grass out of the way with his poles for a closer look. The snake didn’t move an inch.

Andy stepped over the snake and continued on. Just as Laurie stepped over it turned around and slithered down the hillside. Laurie squealed and jumped.

“It wasn’t chasing you. It turned around and went down the hill, that’s all” Andy mumbled as he laughed uncontrollably.

We climbed on, luckily in the shade of the tall trees. It was hot! Up and up we went,  hour after hour.

Laurie turned to her audiobook for entertainment while Andy was content with his thoughts. We climbed in silence, each in our own worlds.

Within 1 mile of the top we stopped to refill our platypus bladders with the bottles of water we were carrying.

The forest was silent. We noted that we hadn’t seen many section hikers and wondered if less people section hike Washington compared to Oregon.

Three tenths of a mile from camp we saw a red pack bobbing along the trail ahead of us. We joked that we should speed up in case we are both headed for the same campsite.

Our pace didn’t change and as we got within a tenth of a mile of the campsite the woman wearing the red pack started running. Laurie and I were talking and she could probably hear us approaching.

This ignited a competitive fire within Laurie – but it was too late.

She got to the spot 5 seconds before we did and dropped her pack.

There was room for only one tent and it was hers. “Have a great night” Andy said without slowing down, as if we didn’t mean to stop there anyway.

But we were bummed.

Our feet hurt, we had climbed over 7000 feet and descended over 4000 feet and we were ready to call it a day.

More than anything we were disappointed to miss out on watching the alpine glow over Mt Adams from our tent.

Oh well, this happens we suppose, but it was the first time it has happened to us on this hike. And it was more frustrating because we had been so close.

But down the trail we went, thinking negative thoughts about the person who got there first. And then the ‘if only’ thoughts creeped in.

“If only we didn’t take as long of a break at the creek. If only we hiked just a bit faster…”

Eventually we got it out of our system and accepted that camping on that saddle tonight wasn’t meant to be.

We descended 1.5 miles to a spring and some campsites. We chatted with some nice SOBOs near the side trail to the spring before scoping out potential flat spots.

Laurie got grumpy as Andy searched around for flat spots. She felt like the first one we saw was good enough and she was ready to get inside and get cozy.

After walking around for 5 minutes to ensure that ours was the flattest around, we set up the tent. We took off our clothes and turned them inside out before crawling in the tent.

This is our method for preventing potential poison oak oils from coming in contact with our sleeping pads, sleeping bags and sleeping clothes.

So far so good in terms of not getting poison a oak rash.

Around 8:30 Andy started cooking and Laurie inflated the sleeping pads and unpacked the backpacks.

Finally around 9 pm we ate. The smile returned to Laurie’s face with a cup full of hot chocolate before dinner.

As we settled in after brushing our teeth we saw a headlight. Andy said hello and a familiar voice responded. It was Coke!

We pointed him in the direction of water and said goodnight.

Tonight we are grateful for shady climbs and branches to hang our Ursacks at night. 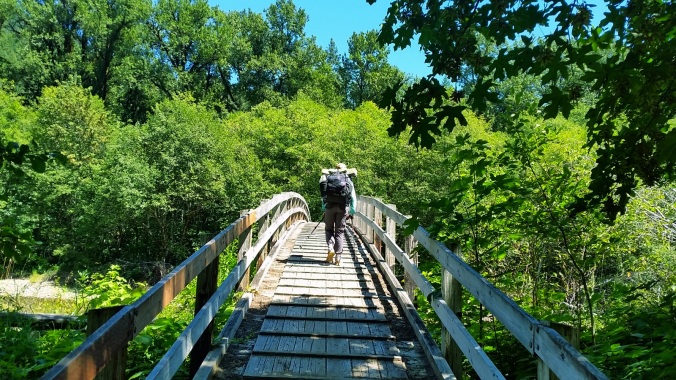 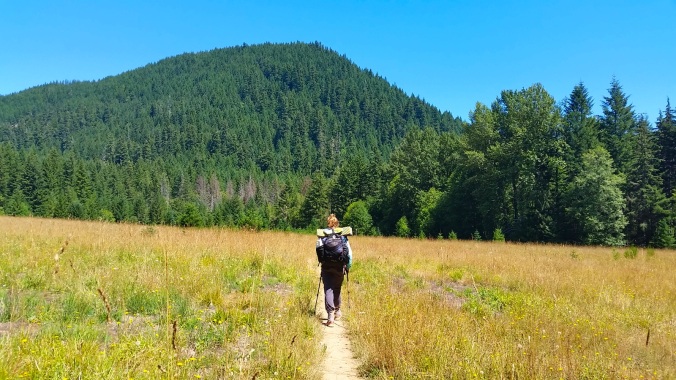 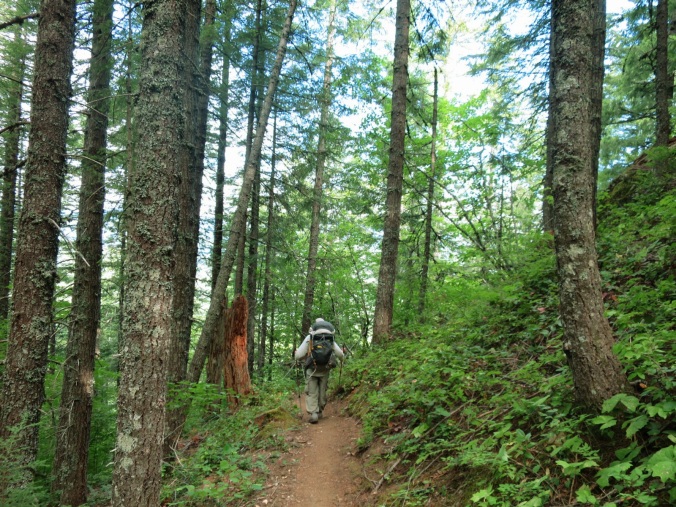