We all slept well in our room, Laurie and her godmother Joanna cozy in the bed and Andy on his sleeping pad.

We left the window open and enjoyed the cool breeze and sound of the rushing creek across the street all night.

Laurie was the first to wake up around 6:20am. Full of excitement for what the day would bring, she sat up, smiled and looked around for others already awake.

The plan was for us to pack up our stuff (we were moving to another room for tonight), have breakfast and spend the day exploring Crater Lake.

But Andy had other thoughts. He stayed up late last night concerned about his achy feet and wanted to drive an hour to Medford to buy different shoes.

He expressed his concerns to Laurie and Joanna, who agreed to go to REI then drive straight to Crater Lake.

We ate curry for breakfast (so good!), packed and piled into the car.

It was a long time spent in the car but hopefully worth it. Andy bought new trail runners and more durable socks.

It was 1pm when we finally reached the Crater Lake entrance station. The line was long.

Summer is here and tourism is in full effect. Bad weather the last 3 days probably made people stick around an extra day.

We drove to the Rim Village excited to see Crater Lake. None of us have been here before and we were antsy to get out of the car and explore.

We drove around for 20 minutes looking for a parking spot. Frustration and feelings of hanger grew in all of us.

We haven’t been in cities much in the past 3 months and have not dealt with traffic and crowds. Old feelings of anger and impatience were surfacing. We held our emotions in check fairly well.

After 20 minutes we gave up and started to drive down the Rim road.

We stopped at a turnout for lunch and finally got a glimpse of the mighty lake.

It’s incredible to think that we’ve walked over 1,400 miles from the Mexican border to Crater Lake. Talk about a reward!

Andy sat on the gound, cut veggies and added them to salad greens. Salad and salami for lunch. Delicious!

Joanna wanted to do trail magic while here so we positioned ourselves next to the trail while we enjoyed lunch. We eagerly awaited the arrival of hikers but only two passed by.

We have seen this pair on and off since Saeid Valley. Andy said hi. The guy ignored him. The woman smiled but said nothing and kept walking.

It’s a shame there aren’t that many hikers around because Joanna brought a cooler full of sodas and beer, two pies, homemade brownies, watermelon, crackers and salami for hikers to enjoy. Something for everyone! Thank you Karen for your contribution as well!

After a filling lunch but uncussessfull trail magic’ing we drove to another turnout.

From here we decided to hike to a high point. And we were so glad we did.

We enjoyed a spectacular view of the entire lake without the crowds.

Is this for real? Are we really seeing this?

Crater Lake really is as blue as pictures suggest. The snow on the surrounding peaks and the clouds added to the drama and beauty.

We stayed at our personal viewpoint for about an hour and left to cache water for the next day.

From Crater Lake there’s a 25 mile waterless stretch and we didn’t want to carry 5 or 6 liters each if we didn’t have to.

We first stopped at a bear box off Highway 209 and it already had water in there. Wow. Thanks to those who maintain it!

We then drove on a dirt road six tenths of a mile north of Highway 138 that also had a big cache. Thank you!

We haven’t relied on water caches our entire hike but since we saw these with our own eyes, there aren’t many hikers around, and we’d be there the next day we decided to carry less water to start with from the Rim.

We had attempted to eat watermelon at the previous two stops but the mosquitoes ate us alive. We pulled off at a turnout overlooking Mt Theilsen and cut into the juicy watermelon.

Another motorist pulled in to check his maps and Joanna offered him watermelon. He joined us, standing around a cooler telling us about his JMT hike in the 90’s. Small world.

The drive back to the little town of Prospect was beautiful. The straight highway was lined with tall, green trees.

We arrived back at the motel around six, got cleaned up and were in the dinner hall at 7pm.

Andy still feels self conscious when going out to dinner because he doesn’t have ‘nice’ clothes to wear. He has clean clothes and smells fine, but doesn’t have jeans and a button down shirt – the minimum he feels is acceptable.

We ordered 3 entrees and shared them – prime rib, stuffed pork chop and salmon.

Good food and good company. What more can a hiker ask for?

Actually there is one thing, and we had that too.

Pie for dessert! We both finished our pies (with Andy stealing a few bites of Laurie’s pie) and began packing our packs.

Today was another whirlwind of a day but we enjoyed each others company while getting a lot done. Maybe after hiking 2,000 miles we will figure out how to actually relax on a zero day.

Tonight we are grateful for moments of peace away from crowds and Joanna’s car. 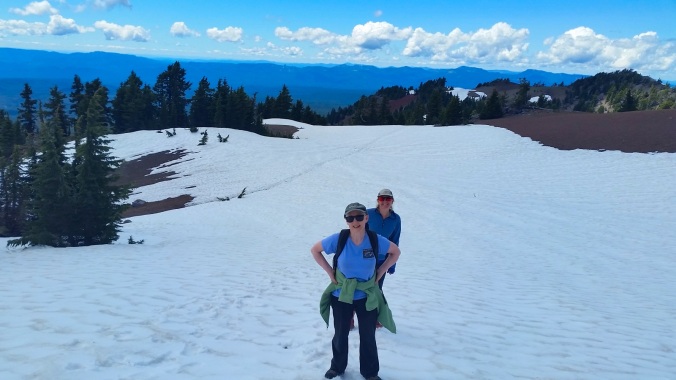 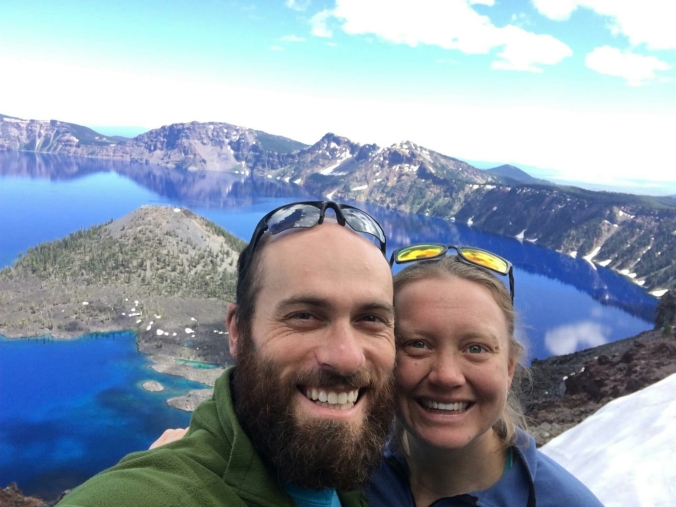 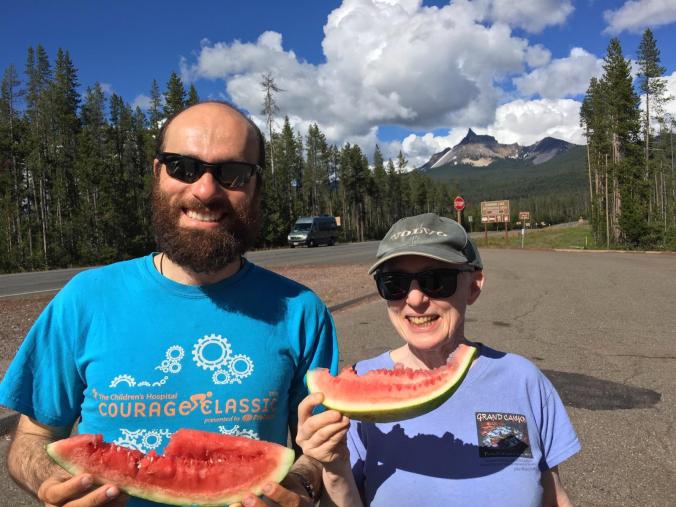 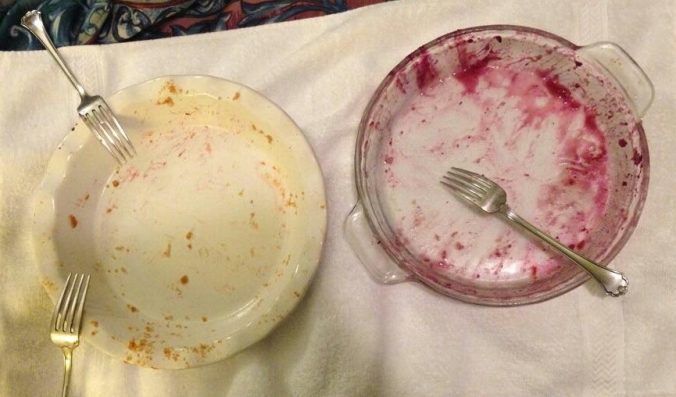