We slept well in the cool breeze. It was so refreshing to feel cozy rather than sticky in our sleeping bags.

When we got going, we gradually climbed out of camp. The cool air and our rested limbs made the walking feel easy.

A couple miles from camp we reached our first spring. It is awesome getting cool and clear water out of the little streams that pop up from under the ground. Andy is thoroughly enjoying drinking non chlorinated water. Seriously, he can’t get enough.

At camp we were 12.5 miles from the Oregon border. We had joked that we would meet for lunch in Oregon.

We spent the morning walking apart, sporadically catching up with one another but now as a group of 5 we all have different needs at different times.

Speed, Fixie and Cardinal were already there, sitting in Oregon waiting for us.

The moment felt surreal for Andy. Over the years he has seen so many pictures of hikers under this distinct California/Oregon sign. And now he is here himself. It feels really good to know that all the hard work saving money, planning and researching has allowed this dream to become a reality.

Along with the other milestones, this pivotal transition felt like it came with an asterisk. We still have 406 miles of California to complete so we really aren’t done, so it is hard for both of us, but more so laurie, to celebrate the milestones.

We both continue to think and talk about this as we walk. Why is it so hard to celebrate the nearly 1300 miles that we have walked? Why does the order matter? Oh brains, why do you make it hard to feel accomplished?

We congratulated one another, took celebratory pictures and decided to hike on given there was no shade and it was still too early for lunch.

We didn’t get far though. About a half mile up the trail we came upon a sign that read “PCT 2016” and pointed to the left.

Talk about a warm welcome to a new state! Ed had an amazing setup which included watermelon, cold sodas, hot dogs, chairs and much more.

Laurie felt so happy and was so surprised that she almost cried tears of joy.

We sat in the shade, chit chatted, ate and drank til our hearts were content. We must have been there for at least an hour.

Since we still had 10.5 miles til camped we pulled ourselves away from Ed, Rio (his dog) and the Pinnacle Bar and Grill and continued on.

Thanks Ed for the delightful treats. You are awesome.

We climbed a gradual hill, talking about Ed, his trail magic and commenting about how we had everything hikers could want at a trail magic stop.

After we crested the hill, the trail was gentle. We walked passed more bear grass and fields of wildflowers.

After hiking up and around a tricky snow patch, we cruised to the 1,700 mile marker.

Congrats to Speed and Fixie for having walked this far!

A tenth of a mile later we reached camp to find Speed already done with dinner and his tent set up.

We all sat around and talked as we ate. It was really enjoyable to be outside without any mosquitoes around.

After dinner the temperature kept dropping, which led all of us to retreat to our tents. We’ve chosen to sleep without the rain fly again tonight. The breeze is going to feel wonderful.

We decided our trail names of Silver and Saver were not playful enough to match our personalities. Now that we are in a new state and nearing our halfway point we have changed our names to Shuffles and Dribbles. We will let you figure out who is who ☺

Tonight we are grateful for trail magic and new states to walk through. 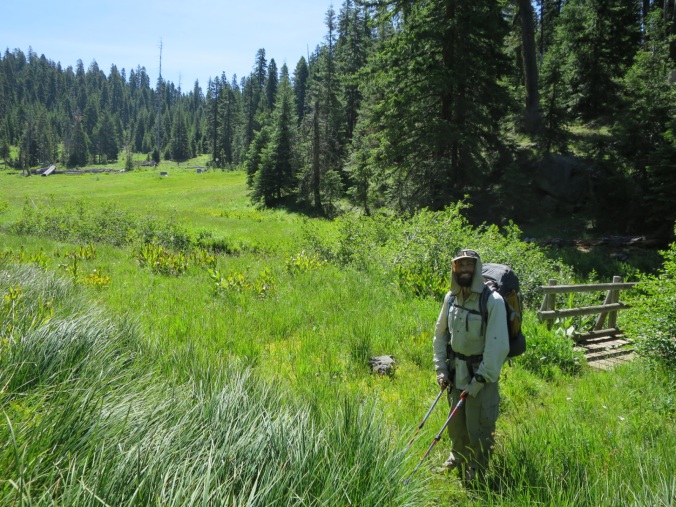 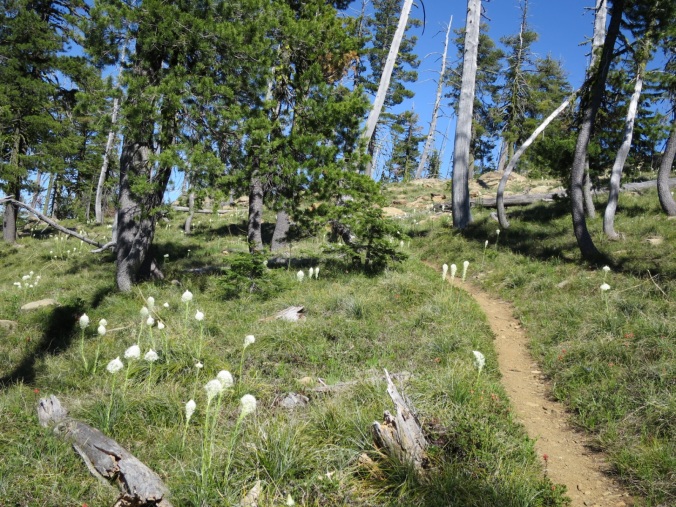