It was only 6.4 miles into the small town of Seaid Valley. The previous two days had been long and we were tired. We choose to let ourselves wake up naturally.

The trail into town is actually a combination of dirt and paved roads. We were all grateful to have a large buffer between us and the poison oak, however walking on asphalt hurts our feet after a while.

Plus, the road made a huge loop to cross over the Klamath River. It was hard walking in the wrong direction for 3 extra miles knowing we were walking further away from pancakes.

The temperature was comfortable and we walked 4 abrest chatting our way into town. The Klamath River shimmered in the morning light. Andy spotted 2 bald eagles across the river; he’d never seed them before.

We made it to the Seiad Valley Cafe around 8:30 am. The place was full except for one empty table.

We left our packs behind the entrance door and headed for the table with our phones and chargers.

Outlets, free wifi and great food at reasonable prices – what more can hikers ask for?

We tried to cram 4 of us into a small space but the owner didn’t approve. She made it clear that we would need to be patient if we wanted a table for 4.

We represent the hiker community wherever we go and do not want to insult anyone, so we let it go. Speed chose to sit at the bar and we shared the table with Fixie.

This little cafe in a small town of 350 people offered gluten free pancakes, gluten free bread and dairy free butter alternatives. How incredible is that?

Laurie was over the moon when she heard the news. We ordered a stack of gluten free pancakes and a veggie omelette with O’Brien potatoes to share.

The pancakes were delicious and the omelette was perfectly cooked.

We weren’t even done eating when the owner came over and asked if we wanted more pancakes.

The meal kept getting better and better!

We loved the food so much that we chose to go there for lunch a few hours later.

In the meantime, we had lots to do. But then we heard there was a farmers market. Even though we were stuffed, we decided to go check it out.

We got a ride from a friendly local we had met the day before up on the trail. Unfortunately, the farmers market was disappointing. There wasn’t any fruit or veggies, just local handcrafts and plants.

We walked back to the cafe empty handed and went next door to the general store to pick up our resupply boxes.

Seaid valley is a tiny town so everything was within 1 block. By 11 am the heat was oppressive. We took refuge in the shade at the RV park next to the store.

We planted ourselves down on the moist grass and started to sort through our packages. This process still overwhelms us. Despite having it all in front of us, figuring out how much to take and of what type of food we need is still a tedious process – especially for Andy.

As we were busy shuffling and sorting, Bruce – the manager of the rv park came over and very graciously explained to us the amenities they offer for day use. Ten dollars gave us access to the lounge area, the shower and coin operated laundry.

The cool lounge area with chargers and wifi sealed the deal for us. We really had nowhere to go and it was nice to sit in a cool room.

We walked over to the Cafe again, sat down at a table for 4 (😄) and eagerly awaited the deliciousness coming our way.

Laurie ordered a hamburger with a gluten free bun (!!) and Andy ordered a mushroom melt with Swiss cheese.

“I forgot how good a hamburger tastes with a bun!” mentioned Laurie mid way through her burger.

The food was excellent, but the service was even better. Our waitress remembered that Laurie was gluten free and that Fixie was dairy free. Moreover, when she presented the options to us she included possible substitutions to accommodate everyone.

There are lots of restaurants in much bigger cities that can learn a thing or two from these wonderful folks.

The kindness of everyone we met and the amazing food has moved Seaid Valley to the number one spot for best town stop thus far. Idyllwild and Etna are second and third respectively.

On the way out Laurie ordered a milkshake. It was huge, delicious and she had no problem finishing it. Suddenly we both are bottomless pits. We eat and eat and eat and never seem to get full. Good thing we have tons of food!!

After lunch we walked back to the RV park and our cool oasis – which unfortunately was warming up along with the rest of the city. We switched the channel on the small tv and watched some of the Olympic swimming qualifiers and Tour de France.

Needless to say it was hard to focus on editing blog posts, posting pictures on Instagram, checking email and speaking with family. But we managed to get caught up on the blog. Wahoo!

We had originally planned to leave at 6pm but a few trips outside to check on our laundry reminded us of how hot it still was, so we bumped our departure to 6:30, and ultimately 7 pm.

We were only walking 2.5 miles and with daylight lasting until 9:30 we had plenty of time.

On our way out of town we stopped in the general store. Laurie and Fixie bought popsicles and Speed bought Gatorade.

“I have never had a Popsicle that melted faster than I could eat it” mumbled Laurie with mango Popsicle dripping down her fingers.

We walked on the highway for the first seven tenths of a mile. There were very few cars and those that passed us waved and gave us plenty of room.

Cardinal, a young woman from the Bay Area is also hiking with us until Ashland. Her hiking partner wasn’t having fun anymore and decided to leave the trail. Cardinal wanted to continue on but not by herself. We were happy to welcome her into our little trail family.

Once on the trail we climbed up and up. Some sections were pretty steep but it was all in the shade. Thank goodness for shade!

It was over 90 degrees when we left at 7 pm and we were soaked in sweat by the time we reached the spring 1.7 miles later. Even in the desert we didn’t experience heat like this. Our pants and shirts clung to our sticky bodies. No part of us was dry, not even our shins.

Unfortunately, this section of trail, like the one just south of Seiad, is notorious for poison oak. We wore our long pants and long sleeves and did what we could to step around the bushes but a few leaves brushed up against us anyway. It wasn’t as bad as we had expected and hope it continues this way tomorrow as well.

We reached camp around 8:30pm and managed to fit 3 tents in a campsite the guidebooks listed as a one tent site.

The mosquitoes were tiny but fierce. We were all hot and sticky from the day and the climb. Thankfully it was a little cooler up here compared to the valley, but still too warm to sleep with a sleeping bag.

None of us made a hot meal. Some of us were still full from lunch while others snacked in our tents.

Tomorrow we plan to be walking by 5am to knock out the massive climb before it gets too hot.

For us that means waking at 4am. Blah.

Tonight we are grateful for our shady oasis and gluten free pancakes. 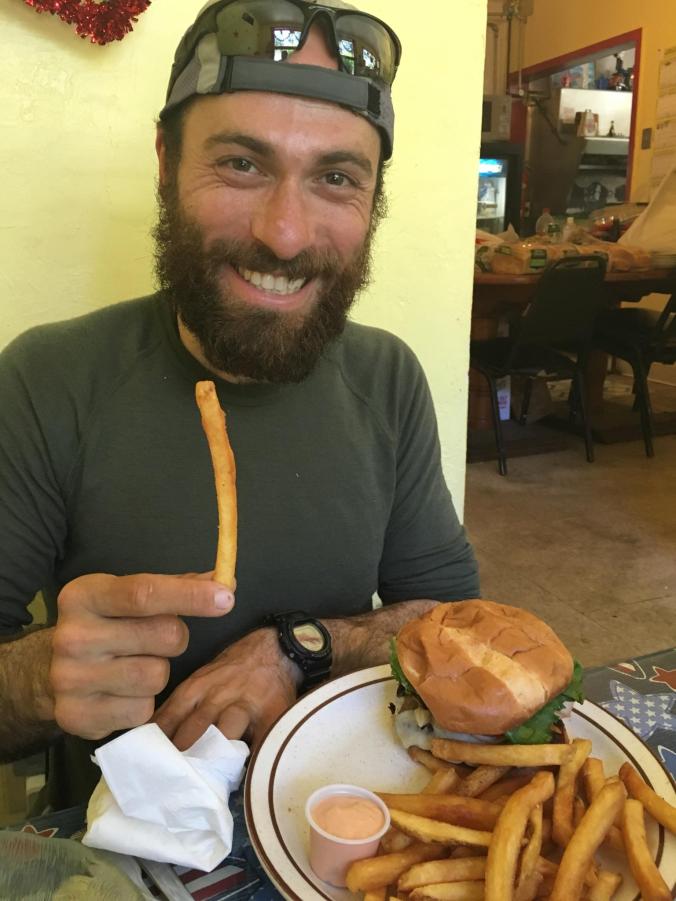 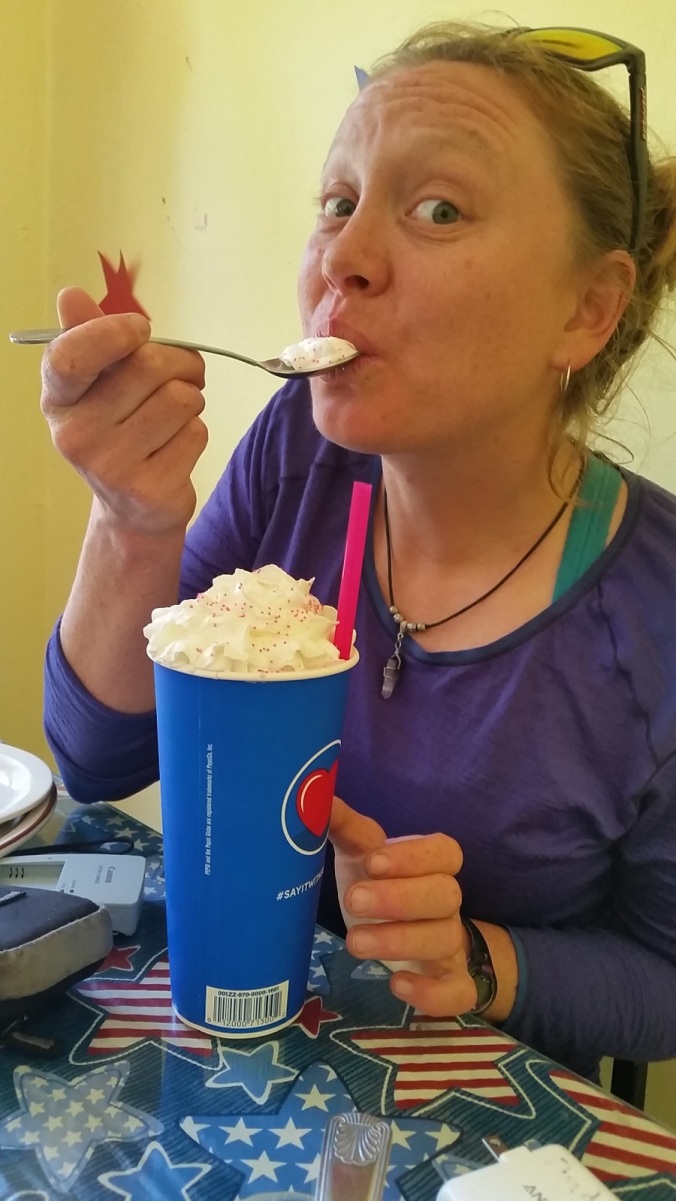 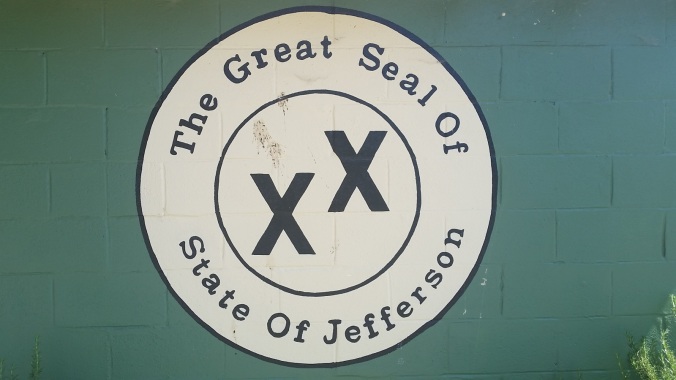