We woke up early, committed to hiking over 20 miles to make the following day shorter. Laurie’s mom Sue is meeting us is Lassen and we want to maximize our time with her.

We were walking by 6:15am, shivering as we began and hoping to warm up as we walked. It was cold!

Search and Rescue had posted a sign warning hikers of “deep snow ahead.” It was dated 5/29 so we anticipated that it had melted but we weren’t entirely sure. We kept our microspikes handy just in case.

The trail was mellow, wandering in and out of the trees and open volcanic ridges. It felt like we were walking along a braid – at times we walked on top of the ridge and other times on either side.

We had a nice view of snowy Mt Lassen in the distance when the clouds parted.

We wandered on, stepping over logs and winding our way up and down the hillsides. The trail was pretty easy and the miles flew by. We kept expecting the temperature to rise but instead it got colder as we got higher in elevation.

After an hour and a half we got to a junction. Every trail and spring are well marked. We left our packs next to the trail and dropped down a third of a mile to Little Cub Spring. The water was clear and cold.

On our major climb of the day, we caught up with another hiker named Karen. She started in Truckeee a few weeks ago.

She was happy to see us as she reported being lonely. We are all ahead of the pack and are lucky to see more than 4 hikers a day. We chatted for a bit and continued on. It was too cold for a long conversation without a layer and gloves!

We encountered a few snowy patches on the north facing slopes but nothing like what we had been on or warned about. We made our way across the snow, Andy digging in steps and Laurie moving quickly to avoid slipping.

About a quarter mile before the Butt Mountain junction (yes that’s what it’s called), the trail crossed over to the southern side of the ridge. The snow disappeared and so did the trail amongst the small Manzanita bushes.

We were thankful for our pants as we plunged through, moving the bushes away with our poles and arms.

From here it was a gentle but windy walk to mile 1325 – the PCT midpoint. It was anti climatic and we felt a whole slew of emotions.

With our skip this was really only our 919 mile marker. That alone is something to celebrate and we feel grateful and happy to have made it this far.

Within 5 minutes, Flo and Gecko arrived. Flo has walked from Campo so we congratulated him on the accomplishment and then we all sat down to eat lunch.

Suprisingly we had service and as soon as we turned on our phones the notifications poured in.

Laurie got an email and text informing her that the results of her Geriatric Specialty Exam were posted. She nervously checked as Andy published our latest blog post.

Laurie passed her test and the celebration continued with a little dancing and singing to Bon Jovi’s “We’re halfway there….oh livin on a prayer.”

Now you have the song stuck in your head. You’re welcome ☺

We parted ways, Gecko and Flo speeding off towards hot chocolate in Chester and we took our time descending through the forest towards the highway and eventually camp.

We walked through logging areas, frequently crossing over dirt roads and past signs warning us of falling trees.

We met two southbound hikers (30/30 and Jukebox) near Hwy 36. Both had flipped up to Ashland from Independence. They fondly spoke of smooth and well manicured trail ahead. We look forward to attempting our first 30 mile day in the near future.

We mentioned yesterday 4 things that slow down hikers (snow, stream crossings, blowdowns and overgrown trail) but there are two others: inclement weather and chatting with other hikers.

Thankfully we dodged the foul weather today. Similarly our conversations with other hikers were nice but short.

Just before 6 we arrived at Stover Spring. The final mile was uphill and for the first time today Laurie broke a sweat.

We filled up our water bottles with cool clear water and set off to find a flat spot. We passed a woman journaling under her tarp. She stuck her head out to say hello. She too just started in Belden and is headed north. It is reassuring to Laurie to know there are people around with similar plans.

We went about our evening routine – both putting up the tent, then Andy cooking while Laurie inflated the pads and stretched out the sleeping bags.

By 7:30 we were fed and cozy in our sleeping bags. It is still cold out but luckily not raining as had been predicted.

Tonight we are grateful for music and our playful spirits. 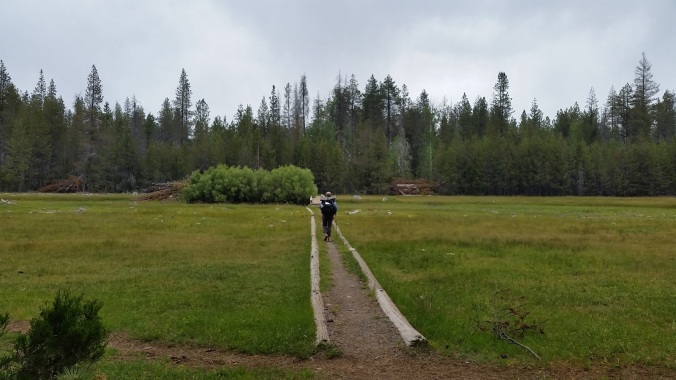 Lassen sittin pretty in the distance

Mixed emotions at the halfway point 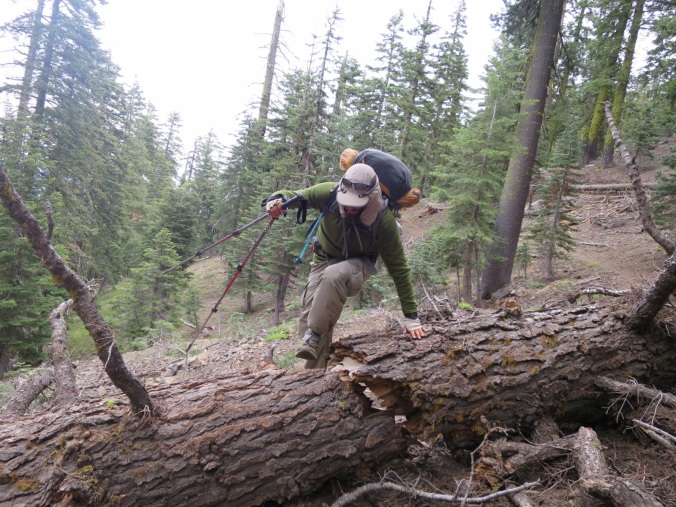 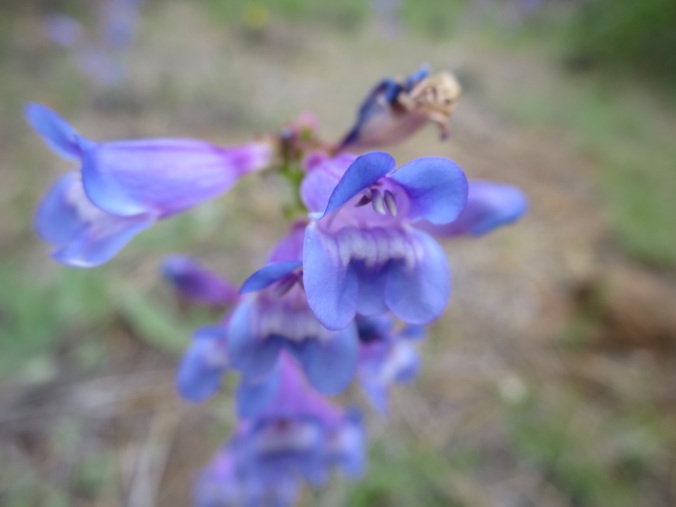