We camped on a ridge near windmills. In hindsight it makes sense why it was so darn windy last night.

Our tent was like a bucking bronco thrashing in the wind. It held up great but Laurie was startled awake a few times when the tent fabric abruptly brushed up against her face.

The wind was intense and made packing up more of a challenge. More than other mornings we had to work together to make sure nothing blew away in the process.

Not even gutting wind could keep us from hitting the trail before 7am. Go us. We’re getting faster with our morning routines.

The air was cool and made colder by the wind. Hiking to Golden Oaks Spring this morning felt a lot harder than it did last night without our packs.

We filled up at the spring with 5 liters each. It was 19 miles to the next water source and if today was anything like yesterday, we would be thirsty!

We met 3 section hikers at the spring and chatted with them as we slowly filled our 10 liters.

We shouldered our now heavy packs at 7:45am and hit the trail. For the most part the trail was mellow. Gentle ups and downs with a few steeper sections around down trees.

We’ve decided Andy will lead on this leg of the hike for a few reasons. One to change things up, and two so he can be in more pictures.

All was going well. Then Andy suddenly stopped. Laurie, who likes to walk on people’s heels, nearly ran into him. There, on the trail was another rattlesnake (we came across a rattlesnake yesterday evening too). He was partially coiled with his head raised – staring at us with his beady black eyes and tongue going in and out.

We waited a few minutes until he slithered away back into the bushes. Laurie was relieved that Andy was leading and we continued on.

“That was the least scariest snake encounter I’ve had. Thank you” Laurie told Andy.

Not even 5 minutes later Andy came to a sudden stop once more. Whadya know, another rattle snake was sunning itself just off the trail. At first it didn’t care about our presence. No rattle. Heck, it wasn’t even looking in our direction. But when Andy intentionally got closer to get it to move, it got real angry, lifted its head, started rattling up a storm and retreated into the bushes.

While waiting for the snake to retreat, Andy noticed Poodle Dog Bush about 10 feet away from the trail. He mentioned it to Laurie but didn’t give it much more thought.

Not taking any chances we went off the trail to give ourselves plenty of room to get by the snake as we couldn’t see it any longer but could hear it rattling.

We continued walking through a burn area. It’s been a while since a trail crew has been through here. Plants are overgrown, trees down and our least favorite plant – poodle dog bush – lined the trail, especially at mile 591.

We thought we were done with this noxious bush and were not too keen to be reunited. Luckily the plants were small and we were able to step around them.

We walked for another mile and decided to take a lunch break under a beautiful oak tree. This part of the trial is stunning. Green hillsides and grassy meadows. The wind creates ripples as it moves through the grass as if waving hello.

After we got going again, the trail started to climb. No switchbacks, just a consistent uphill for about 2 miles. It was warm and Andy set a good strong pace. We our fourth snake of the day here too. A small, thin, greenish grey snake with a reddish underbelly. It quickly scurried off the trial. Whew.

We passed 2 of the 3 people we have been leap frogging with today and found the 3rd, Big Red, sitting on a rock at the top of the hill filtering water.

We took a breather and chatted for a few minutes before continuing on. The trail wound through a pine forest minimally gaining or losing elevation. The ground was soft and the smell of pine trees lifted our spirits. We are transitioning out of the desert and into the Sierras.

The trail joined a dirt road where we encountered a very nicely made 600 mile marker. We took a few pictures and continued on. Laurie’s feet were starting to ache and she had already eaten her daily allotment of candy. Needless to say she was uncomfortable. And when she becomes uncomfortable she gets quiet.

Just after the 600 mile marker we turned a corner and were surprised to see a truck coming right at us. The owner of this beautiful property was driving very slowly and stopped to chat with us before moving on.

We made it to Robin Bird Spring about 6:15 pm. There eating dinner were Walking home and Phillip- 2 hikers we started the day with yesterday. They thought we were miles ahead and we thought they were behind us.

The trail really is funny like that. Hard to really know where other hikers are if you are not in constant communication with them.

We made the final push to camp 1.3 miles from the spring only to get there and not like it very much. Four tenths of a mile away was another campsite so we hiked on. Nearing the site we noticed a bright green tent already set up there.

“Over here” Andy shouted toward Laurie.

To the right of the trail and slightly uphill of the next camp was a relatively flat spot tucked away in the trees.

We decided to call it home as it was already 7:15pm.

We made dinner, talked about this and that, and cleaned up.

We’re tired. It was a long day.

Laurie was asleep by 8:45pm while Andy finished putting away the stove and blogging. It’s half an hour past hiker midnight and time for some shuteye. Hopefully we’ll sleep better tonight. It’s windy but we’re in the cover of trees.

Tonight we are grateful for beautiful mountains and soft dirt covered in pine needles. 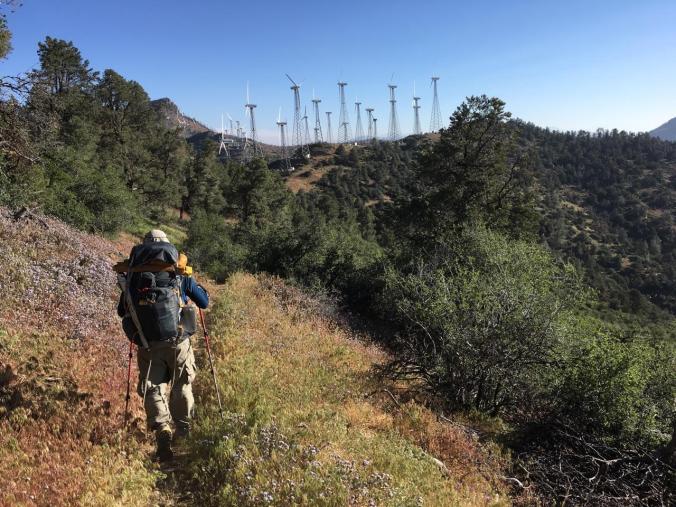