I woke up with a very stiff neck. My pillow had unraveled during the chili night. But no matter, we’re in the backcountry. And there’s no one else here. We saw only two people (day hikers) yesterday and probably won’t see many people today either.

Sunrise was absolutely spectacular. The few clouds that lingered turning orange and pink before the sun greeted us.

We lounged about in our tents until 8am, finally deciding to brave the cold and take care of business.

Around 9 am we were finally hiking. We predicted to be up and over Koip Pass by 11. Boy were we wrong.

There was so much more snow on Koip mountain than we expected. It was slow going as we kicked steps into snow to make progress. We must have been the first group to hike this trail after the last snow fell.

As the sun made its way over Koip mountain, it softened the snow enough to make kicking steps easier.

We decided to skip the switchbacks and go straight up the mountain. It was slow going and hard work, but we kept at it. I’m not very comfortable on snow and this was Erin’s first time traversing snow.

We both did very well. The dropoffs were massive and there were a few stretchy, rocky sections to manouver around, but we did it – following our fearless, sure footed leader Laurie most of the way.

By noon, we had finally made it across the pass.

We dropped our packs and devoured most of the food in our sacks. After consuming too much guyere cheese, an entire tray of smoked salmon, gorp, powerberries, and ginger chews, we were ready to set off once again. Except we didn’t want to put on our wet socks and shoes.

Nature always has a way of getting you moving though. In this case, the wind began howling and we were moving in no time.

On the long downhill to Alger Lakes, we took off most of our layers and couldn’t believe how different the landscape was on the south side of Koip Peak.

At 5pm we made our way down to Gem Lake, where we made the decision to hike to Thousand Island Lake.

We climbed up to Gem Pass, then gradually down to the Waugh Lake/Agnew Pass junction. After a refill of water and snacks, we hiked the 2 miles to Agnew Pass.

It was 6:30pm and the light was fading, but we kept walking. No turning back now.

At 8pm we finally made it to Thousand Island Lake with our headlamps lighting the way.

We ate dinner and went to bed. Erin and Laurie again shared the Tarptent while I chose to sleep under the stars.

I don’t like critters, and I saw a few spiders and mice, but the night sky won me over. 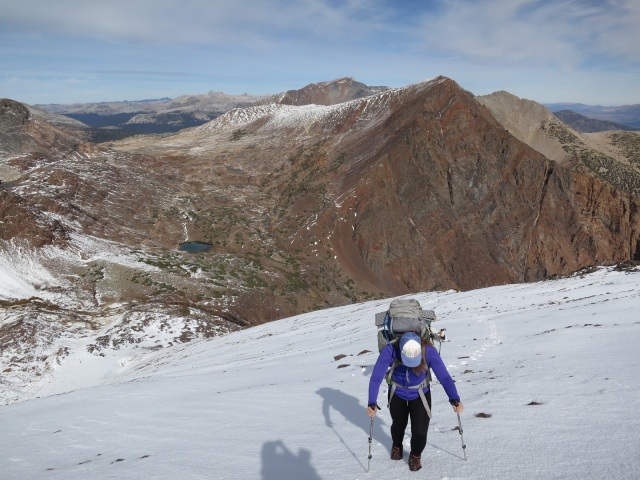 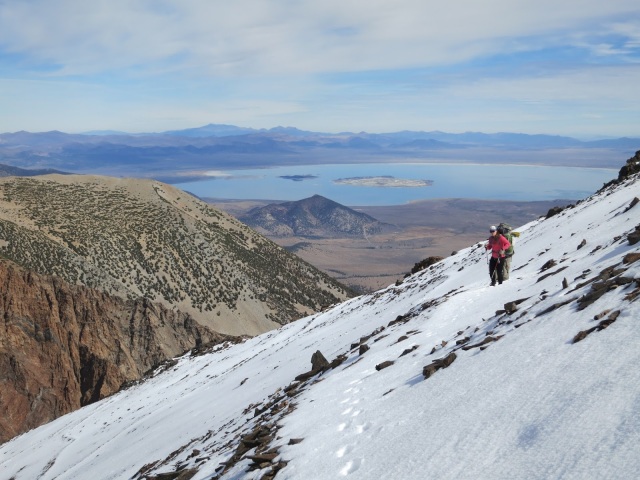 So much has changed in a year and a half. It's hard to believe we got married at this very spot in June 2018. Life sure if different now but we wouldn't trade it for anything. Every day is sweeter and more fulfilling with our little guy, but life is more challenging too. Reminders to appreciate the moment, enjoy one another and go with the flow are aplenty. Case in point, we went to Yosemite this past weekend to snowshoe with Miles but high winds and downed trees closed Hwy 41. With no access to Badger Pass, we Spent time in The Valley. As back up plans go, it's a pretty good one and we made the most of it.
First snowshoe this winter was to Minaret Vista in Mammoth. It's a fairly level snowshoe but still challenging at 9000 ft. It was blustery but Miles stayed nice and toasty in his koala onesie. It was a good test run for the adventures we have planned for this winter. : : : : : : #minaretvista #mammoth #mammothmountain #mammothlakes #snowshoe #snowshoeing
We left LA with one goal - camp in the Alabama Hills and wake up with the sun kissing the Eastern Sierra range (I guess that's two goals?) At 7am we ripped the vinyl covers off the camper windows, excited to catch the sunrise. In doing so we woke Miles, who looked around, still delirious with sleepy eyes, wondering what all the commotion was about. We both laughed, knowing how grumpy Miles can be when woken from his sleep unnaturally. In the end, it was worth seeing the sun light up a mountain so special to us. And sharing that with our little man made it more special. : : : : : #alabamahills #alabamahillscalifornia #easternsierra #sunrise
“Hey look, we’re hiking above the clouds” says Laurie to the LA native. To which I respond, “No sweetie, that’s haze.” A lot of people don’t like LA for a lot of reasons, many of them valid. But I’m still one that really appreciates the Nature that is so accessible from many parts of the city. This photo was taken from the Mt. Wilson Trail, built in the 1800s, that begins in the town of Sierra Madre and ascends ~almost 5,500 vertical feet (in under 7 miles) to the top of Mt. Wilson. The trail kicked our butts as we hadn’t done a hike like this in a long, long time. It’s been three days and we’re still very sore from it. . . . . . . #mtwilson #mtwilsonobservatory #mtwilsontrail #mountwilson #socal #socalhiking #hikinginla #mountwilsontrail
We’ve enjoyed two solid days of play this weekend. Doesn’t happen very often but it sure felt good to get outside! Video - Sugarloaf Open Space, Walnut Creek, CA Photo - Marin Headlands
Just a guy skipping rocks like a boss (:
%d bloggers like this: